Current Through Nanojunctions in Response to an Arbitrary Time-Dependent Bias

A major goal of nanotechnology is to design and construct electronic devices using individual molecules as circuit components. Applications of this technology have included molecular wires, diodes, and two-terminal switches for molecular memory and logic gates. This drive towards miniaturized electronics has stimulated an intense degree of experimental and theoretical research into the electron transport properties of various molecular structures coupled to macroscopic leads. Most of the research to date has focused on conductance calculations for a static voltage, or on steady-state current calculations performed within the framework of the Landauer-Büttiker (LB) formalism.

However, recent experimental work has focused on the dynamical response properties of nanostructures, both in the transient regime following the switch on of a bias and for long times subsequent to the switch-on when the bias varies with time. Working within the Nonequilibrium Green’s Function (NEGF) formalism, Mike Ridley (TSM-CDT cohort 4) and his supervisors Lev Kantorovich (King’s College London) and Angus MacKinnon (Imperial College London) show inPhysical Review B 91, 125433 that a generalization of the LB formalism is possible, enabling calculation of both the transient and long-time current through a nanostructure when the bias dropped across it varies arbitrarily in time. This offers a novel and efficient methodology which simultaneously spans multiple time scales in the electron transport problem defined by (i) the timescale over which the bias varies, (ii) the timescale of relaxation processes following the switch-on, and (iii) the intrinsic frequencies in the system due to the separation of intra- or inter-molecular energy levels.

Improving on the LB formalism for an L-C-R nanojunction: the bias (dotted line, switched on at t=0)is plotted against the LB prediction at each value of the bias (red line), and the current obtained from the formalism developed in Physical Review B 91, 125433. Deviations from the LB formalism are clearly visible in the short-time transient and in the ‘ringing’ signal that appears at long times following the switch-on. 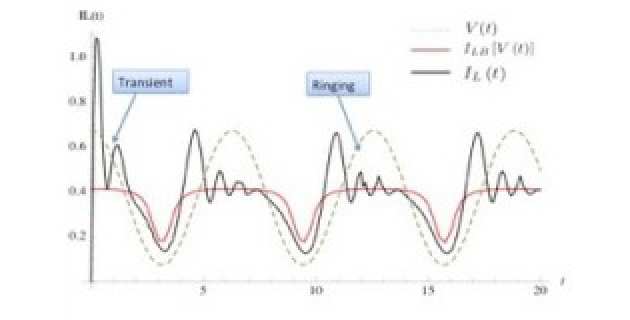 In this work the formalism was applied to the simple case of the current response to a periodic bias through a quantum dot sandwiched between two leads. The authors identified the physical source of ‘ringing’ oscillations occurring over shorter timescales than those defined by the driving frequency, as well as investigating the effects of changing the system temperature and the strength of the coupling between the dot and the leads. Furthermore, the predictions of the LB formalism were recovered in the adiabatic limit of a slowly varying bias.