The scientific need for the Centre for Molecular Bacteriology and Infection (CMBI) is driven by several factors, which include: “The persistence of infection as a major cause of morbidity and mortality in the world”. Our research project aims to tackle the problem of persistence and chronic infection by Pseudomonas aeruginosa. P. aeruginosa is a gram-negative bacterium found in various environments including soil, water and vegetation. Importantly it is an opportunistic human pathogen, responsible for numerous nosocomial infections in immuno-compromised patients. These infections are fatal in cystic fibrosis patients.

(i) P. aeruginosa, such as most microbes exist as surface associated communities called "biofilms". The
biofilm lifestyle is an efficient means for microorganisms to maintain a protected niche. In humans, establishment of the biofilm leads to chronic bacterial infection. Biofilms have been shown to display increased resistance to antibiotic treatment and are recalcitrant to eradication via the immune system. To spawn novel communities in new locations, microorganisms must successfully transit from the biofilm to the planktonic growth state. Whereas molecular knowledge on the biofilm formation process is now increasingly available, how bacterial cells detach is largely unknown. However, a productive field of investigation is likely to be the identification of molecular targets, which induce natural dispersion of the biofilm and make the released planktonic bacteria accessible to efficient therapeutic treatments. Our group will focus on identifying the key regulators that are involved in the perception of environmental cues that induce biofilm formation or dispersion and on the characterization of the molecular determinants that mechanically contribute to biofilm development and subsequent disruption.

(ii) P. aeruginosa is capable of releasing a wide variety of extracellular hydrolytic enzymes and to inject
effectors within host cells for hijacking their signalling pathways. In all cases the secretion mechanism involved multi-protein complexes that are partly embedded within the bacterial cell envelope. Several of these systems have now been well characterized. The secretion of proteins is crucial for many aspects of bacterial pathogenesis since it mediates interaction with the host and contributes to colonization, survival and cytotoxicity. Our group will focus on the characterization of the newly described type VI secretion system, which appears in several copies on the P. aeruginosa genome, which is widely distributed among bacterial pathogens, and which has been shown to play an important role in P. aeruginosa pathogenesis. 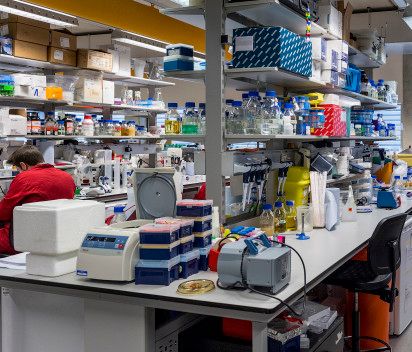