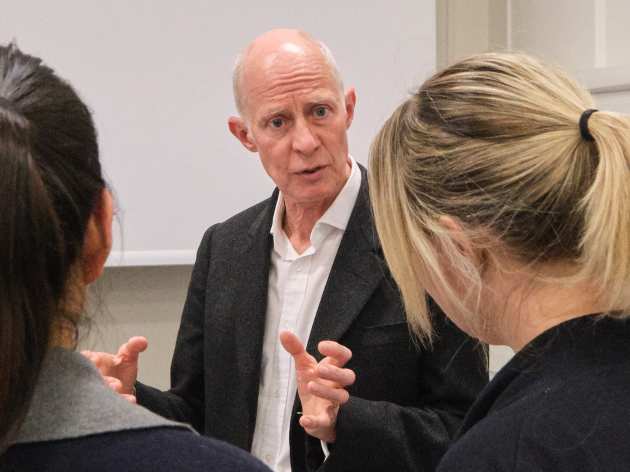 “I’m interested in what’s going on in terms of performance and craftmanship in medicine, science and engineering,” says Professor Roger Kneebone. “Often our focus in teaching is on the acquisition of scientific or clinical knowledge. That’s vitally important, of course, but it’s not the whole story. I’m looking at these other parts of the story that currently don’t get the attention I think they deserve.”

Professor Kneebone joined Imperial in 2000 to develop his interest in medical education and, in particular, using simulation. He explains: “A lot of my early work on simulation was about developing different approaches to that idea of creating a proxy for actual clinical experience where there’s a sense of realism, but nobody gets hurt if they got it wrong.”

This led, for example, to the creation of a low-cost pop-up operating theatre, which could be used not only to teach medical students, but also to give members of the public of all ages a hands-on experience of surgery at science fairs.

Working with Aaron Williamon, Professor Kneebone also set up the Imperial and Royal College of Music joint Centre for Performance Science. Through this, he became interested in looking for connections between medicine and science, and apparently unconnected worlds.

An example of this is the thread work carried out by surgeons and the thread work of lacemakers. He explains: “From time to time, in their operations, surgeons need to join things together using threads and sutures. But most of the time they’re not thinking or doing things with threads, they’re doing he other things inside and outside the operating theatre. Whereas lacemakers often have to work and teach other people how to use threads, because most of their work is expressed through the medium of threads.”

Lacemaker Fleur Oakes became artist in residence at Imperial’s vascular surgery department in 2016. She is working with Professor Kneebone and vascular surgeon Colin Bicknell on teaching skills related to surgery via the techniques of lacemaking.

“Fleur started teaching people to how put in tiny stiches, how to recognise how hard you can pull on threads without causing damage, and how to sew round corners in bits of fabric you can hardly see. She’s also created a textile metaphor for clinical practice that allows people to practice the skills of surgery without needing in depth knowledge of anatomy and disease.”

As a result, Professor Kneebone and his colleagues are developing a pilot programme for qualified doctors who are training to become vascular surgeons.

“Surgeons only get to work with living people’s bones relatively late on in their careers, after they’ve spent a lot of time watching operations and maybe doing tiny bits of them. On the other hand, stone carvers spend hours, days and years immersed in the materials they work with much earlier on.”

The most recent example, ‘the Chemical Kitchen’, has received £300k pedagogy transformation funding  for a three year project in collaboration with Professor Alan Spivey. This is a training programme for undergraduate chemistry students. They will work under the supervision of expert chefs in the kitchen, carrying out cooking procedures – such as accurate weighing, measuring temperatures and interpreting instructions – that parallel laboratory procedures. At the same time the chefs will gain new ideas from working with expert chemists.

“These are educational innovations. As far as we know nothing like this is happening anywhere else in the world. We hope very much that it will go on to act as a blueprint for ways of working scientifically that go far beyond chemistry. In engineering or physics, for instance, you need to work safely at close quarters with other people in a potentially hazardous environment, as in a kitchen where you could get burnt or injured.”

Professor Kneebone believes there is a pressing need for this type of skills training: “Many people are not learning these things at school any more, and very often they’re not learning them at home either. Many practical subjects are being taken out of the secondary school curriculum: no woodworking, no cookery, no DT, no design, no performing with musical instruments.”

He adds: “We’re keen to acknowledge the importance of physical doing as an integral part of clinical and scientific practice. The fact that we’ve got funding shows that Imperial as a whole, and indeed the wider scientific community, is beginning to recognise this.”