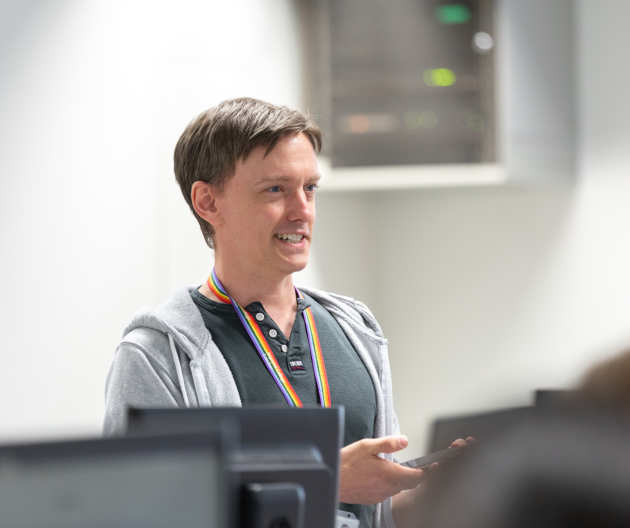 Wikipedia is one of the most widely-visited sites in the world and, although it can be edited by anyone, there are relatively few active editors. But thanks to Dr Steve Cook, Wikipedia has dozens more editors whose scientific knowledge is coupled with good communications skills.

Dr Cook is a Principal Teaching Fellow in Imperial’s Department of Life Sciences and one of his roles is teaching on a science communication module taken by final year biology and biochemistry undergraduates.

As part of this module, he runs an interactive workshop where students learn how to become Wikipedia editors. Then he assesses their skills based on a science-themed Wikipedia page they either create or update for their course work.

“I want them to use their scientific knowledge to explain scientific concepts,” he explains. “But I also see the Wikipedia workshop as payback for undergraduates because they’re using Wikipedia all the time. I like it because it’s authentic; they are making a real contribution.”

All the students who take part have opted to write a final-year literature review combined with a month of studying how to communicate science to a lay audience. The module includes coursework on creating lay summaries, and writing and editing science news articles, as well as talks from alumni and high-profile experts. Speakers have included BBC science presenter Adam Rutherford, science writer Angela Saini and wildlife camerawoman Ester de Roij.

The Wikipedia workshop is an option offered alongside three other skills workshops. In the other options, students create a short video, a podcast or an infographic. Each one offers students an opportunity to use their knowledge in a practical way.

“At first, I was unsure what we were actually going to learn from the session, but I found the session engaging as I actually got to practice on the spot.”

Dr Cook continues: “I end up with about 20 to 30 students taking the workshop. They come along and they sign up as named editors on the site. Then I give them an introduction to what Wikipedia is, and the importance of things like a neutral point of view, verifiability, and being civil.”

Next students learn about the basic elements of Wikipedia articles and how to use Wiki markup – the code used to format text in Wikipedia – to create those different elements.

After that, Dr Cook talks to the students about how to select an article or topic to work on. This means understanding whether an article is currently being edited by others, as well as choosing a useful topic.

“I want them to select articles would be of interest to a wide audience that need improvement. For example, something useful for a GCSE or A level student, like gas exchange or fermentation.”

Over the following few weeks, students make their choices and carry out around four days’ work on their chosen article. At the end of that time, Dr Cook assesses their input.

“There are two components to the assessment. The first is whether they’ve done the Wikipedia bit right. So that’s me going through with a fine-toothed comb making sure their Wiki markup is correct, that they’ve responded to comments from other editors, and that they’ve been civil.

“The second component is whether the article is accurate, complete and pitched appropriately to its expected audience.

“I credit them if they create and release original imagery as well. For example, one student chose to work on carnassial teeth, which are the slicing teeth that some carnivorous animals have. She took a load of photos and made some video footage using the skull collection that we have here at Imperial, which was great. Other students have taken pictures from our slide library to illustrate articles on parasites.”

The course has now been running for eight years and Dr Cook believes that this exercise not only teaches the students some new skills, but also enables them to make a contribution: “They are actually writing and editing something real. For many of them, this could well be the only piece of coursework they produce as an undergraduate that’s read by anyone other than their markers.”

And feedback from students on the science communication module as a whole is very positive: “The thing I hear repeatedly is that they just love the fact that it’s different. Students say it’s made them think about societal impact and the way that science interacts with policy. It helps them see that science is actually part of life, not this separate thing that goes on in universities and nowhere else.”