Only the meeting organiser can set up and run breakout rooms in Teams Meetings. Presenters and Attendees are not able to create and open breakout rooms.

Breakout rooms can only be set up by using the Microsoft Teams desktop app for either Windows or Mac. They cannot be set up using Teams in a web browser or through the Teams mobile app.

Meeting attendees can participant in breakout rooms using any platform.

To set up breakout rooms, organisers will need to ensure that the new meeting experience setting is enabled in Teams. Complete the following steps to activate this setting:

Meeting Organisers will need to complete the following steps to set up breakout rooms for a Teams meeting:

Once the above steps have been completed, organisers can then choose to do the following:

For full, step by step instructions on setting up breakout rooms for a meeting, please see the help materials on the Microsoft Teams support site.

It is important to adhere to faculty guidance when using breakout rooms with Microsoft Teams, as some departments will use an alternative method to set up breakout rooms, as listed below. Your Faculty Ed-Team will be able to offer advice and information:

Note: We advise that you use the above method to set up your breakout rooms, please only use the below workaround if you have been told to.

For this workaround you will need to have access to a Teams site configured with the setup below:

Channels within the site should include:

Public channels can be used for sessions where privacy is not required; private channels should be used where each group needs to have an exclusive space, e.g. if the work will be assessed. Students and staff must be added individually to private channels.

The module Teams sites generated by the Banner integration follow the same template and can be used for this purpose; they include a General channel and public channels labelled Breakout Room 01-10. Additional channels can be added to these sites as required. Please note that a maximum of 30 private channels can be set up on a Teams site.

The Teams view in the left-hand panel of the Teams app shows the channels available in a team. Private channels are indicated with a padlock icon. If using private channels, users only see the channels they have access to, which makes navigation easier, but requires more setup. Some channels may not display in the list; click on the hidden channel(s) link to show these. 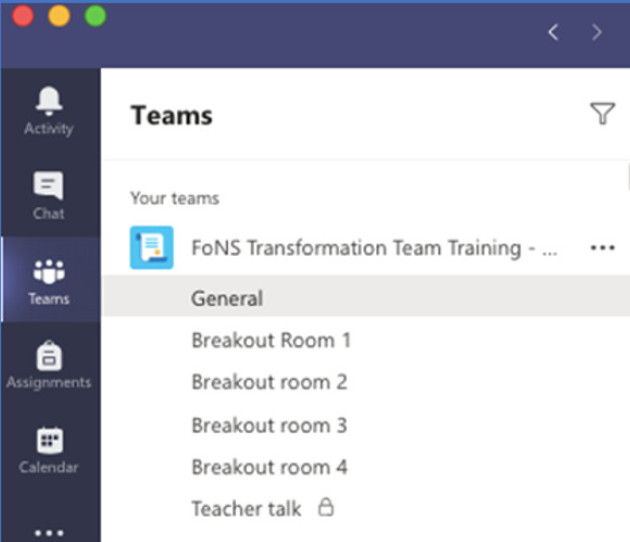 Setting up a meeting in the Teams site

A meeting for the teaching session can be set up using the Meet now function in the General channel of the Teams site. Please follow the instructions found on the Setting up meetings in Teams under the Meet now meeting tab to make sure that permissions are set correctly. Please note that it is best to use the desktop app, as this provides full functionality.

Providing information on groups and rooms

If set groups will be used, either in public or private channels, you can post details in advance in Blackboard or in the Teams site.

If the students have not previously taken part in a teaching event using channels as breakout rooms, it is helpful to provide information in advance, so they know what to expect. Download our Students using breakout rooms in Teams PDF (535kb) for more information.

Below are some examples of potential scenarios for setting up workaround Breakout Rooms.

If your activity requires one member of the group to act as the group leader or scribe you can also indicate who should take on the role at this point.

After an initial introduction in the General channel you will work in your Action Teams as follows:

When you move to your Breakout Rooms, the first-named person in each pair above should start the Meet Now meeting.

If ad-hoc groups are needed during a teaching session, e.g. breaking into groups during a lecture for discussion, you can do this on the fly by indicating a way for the students to divide up at random. For example, if you have 20 students in your class and want 5 groups of approximately 4 students each you could use the following approach:

Or for a class of 60, where you want subgroups of approximately 5, you could suggest students join Breakout rooms as follows:

Please note this suggestion require you to add two new Breakout Room channels (11 and 12) if you are using a standard Banner generated module Teams site.

The method of division should be strictly random. For example, it would not be appropriate to use surname to divide the class into groups, as this would probably result in non-random groups because of the frequency of particular names in particular countries/parts of the world.

For ad-hoc groups, it is important to emphasise that only one student should set up the Meet Now meeting in each channel. Students can decide who will do this in the chat of their Breakout Room channel before they start the meeting.

Sending the groups to their Breakout Rooms

You should provide the following information:

If you plan to communicate with the groups using posts or announcements (see below) you can suggest that groups designate one person to keep an eye on the Breakout Room channel chat for announcements.

Observing the activity of students in Breakout Rooms

The Teams view in the left-hand panel of the Teams app shows meetings that are taking place in the channels of the team. If you see that more than one meeting is underway in a channel, you can go to that channel and ask all the students to move into one meeting.

You can see which students are in which meeting by entering the Breakout Room channel and looking at the top-right of the Meet now meeting.

At the end of the breakout session, when students are due to return to the meeting in the General channel, you can check which students have returned by viewing their status in the Participants window. This shows students who are On hold, i.e. still in their Breakout Room channel; those who are back in the meeting in the General channel will show with a microphone by their name.

Sending a message to all channels

It is possible to send a message to all the channels, for example, to ask everyone to return to the main meeting in the General channel or to send an important announcement to all groups.

1. In the General channel click on New Conversation in the Posts tab and then click on the A-Paintbrush icon (Format) at the bottom left of the text entry field.
2. Click on the option to Post in multiple Channels and select the required breakout channels to post to.

3. Your selected channels will appear in the To section.

4. Finish writing your message and then click on the send icon.

Please note that for meetings where everyone in the team is present, a good way to ensure people are notified is to @mention the entire team.