How the vaccine works

Imperial’s vaccine against COVID-19 will train the body’s immune system to recognise the virus and help it to defend itself against a future attack.

Traditional vaccines are often based on a weakened form of a virus or parts of it, but the Imperial vaccine is based on a new method. Instead, it uses bits of genetic code (called self-amplifying RNA), rather than bits of the virus.

Once injected into muscle, the cells should produce copies of a protein found on the outside of the virus. This trains the immune system to respond to the coronavirus so the body can easily recognise it as a threat in future.

The upcoming trials will be the first time the vaccine has been tested in humans and will show what dose is needed to produce an immune response safely.

How was the vaccine made?

Coronaviruses are covered in spike proteins that stick out from their surface and which the virus uses to get into cells. Once inside, the viruses can produce thousands/millions of copies of themselves and can then spread to infect other cells.

When the outbreak first emerged, scientists in China isolated samples of the SARS CoV-2 virus from patients with COVID-19 and were able to sequence its genetic code – which is made up of Ribonucleic Acid (RNA).

The Imperial team, led by Professor Robin Shattock, focused on the part of this sequence that holds the blueprint for the spike protein. They were able to recreate the sequence using enzymes in the lab and generate copies of the RNA without the need for animal cells or human stem cells.

The result is short strands of self-amplifying RNA which hold all the information needed to make the spike protein. These strands are packaged into tiny fat droplets, which form the final vaccine.

How does the vaccine work?

When the Imperial vaccine is injected (into the arm, or the leg) the cells of the muscle will take up the tiny fat droplets and the RNA they contain.

Once inside the cell, the self-amplifying RNA produces copies itself, which can instruct the cell’s own machinery to make the coronavirus protein. This process takes place in the cytoplasm of the cell and so doesn’t affect or change the cell’s own genetic material (its DNA).

The muscle cells will then produce lots of the spike protein – but not the whole virus. Some of the proteins will be presented on the surface of the muscle cells, as part of the normal process the body uses to show the immune system what’s going on inside cells.

When the immune system comes across these tiny spikes, it recognises them as foreign and creates antibodies. These antibodies have an important role in fighting viruses as they bind to the spike proteins and may prevent the virus from infecting cells. This process also creates a lasting memory of the spikes so that the body ever comes across them again, it will recognise them and be able to mount a quick response.

Since the outbreak at the end of 2019, the novel coronavirus SARS CoV-2 has spread rapidly around the world and caused hundreds of thousands of deaths. One of the reasons it has been so harmful is that it is a new or novel virus, and people had no immunity against it.

Ultimately, the aim of the vaccine is to trick the body into thinking it has already seen the virus and made an immune response, so when you come into contact with it in real life, you should already be immune.

How the vaccine works

We are now recruiting more participants for the first phase of our COVID-19 vaccine trial at our West London study facility.

Complete our online pre-screening questionnaire to check your eligibility. 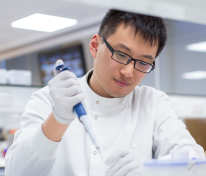 Find your calling at Imperial

Postgraduate study at Imperial's Faculty of Medicine
Medical expertise is more important than ever. Learn skills that save lives at Imperial.
Print Email