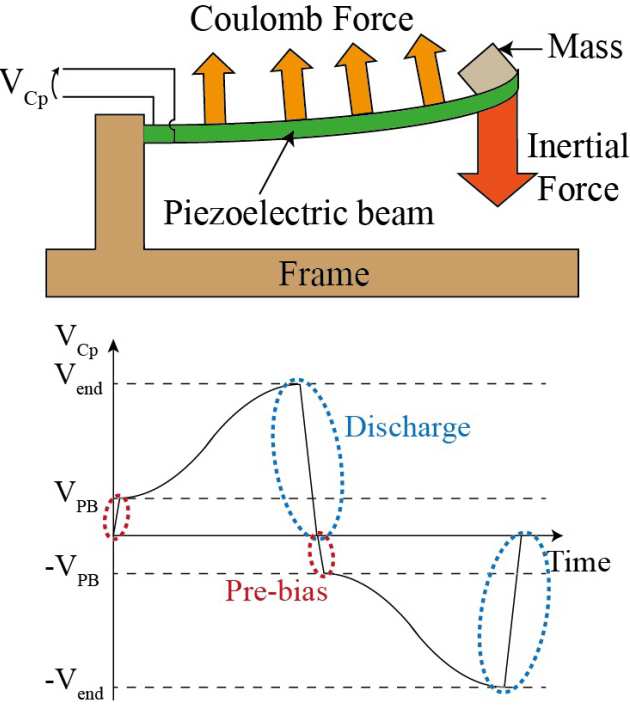 Wireless sensors have seen a dramatic increase in their use as their power consumption has decreased. However they are still limited by their reliance on batteries as a source of power. Research has therefore been conducted into developing energy harvesters, devices capable of converting ambient sources of energy into electrical energy. One form of these harvesters can take is a piezoelectric harvester which induces an electrical voltage when mechanically stressed.

A technique that enabled the electrical damping force to be set by a single voltage was developed at Imperial in 2011 called Single- Supply Pre-Biasing (SSPB). This technique generates a coulomb damping force on the beam by modifying the electrical charge on the beam at the extreme points of its motion. The Coulomb force opposes the motion of the beam as it moves from one extreme point to the other, thereby increasing the work done and hence the power extracted. Once the beam reaches the opposite extreme point of motion, it is discharged and pre-biased with the opposite polarity, thereby reversing the direction the Coulomb force is acting in.

The circuit has been theoretically and practically demonstrated to outperform all other piezoelectric interface circuits for resonant vibrations. Adaptations for piezoelectric material degradation and maximum power point tracking (MPPT) have been designed and implemented.