Sodium-ion batteries have shown potential as a cost-effective successor to Lithium-ion batteries for large-scale, low-cost electrical energy storage applications. There are many advantages to exploring the sodium-ion alternative: sodium is distributed evenly and abundantly around the globe; aluminium, rather than copper, may be used as the current collector significantly reducing cost; the equivalent sodium electrolytes are far cheaper; and the processing system is identical, meaning that the production of sodium-ion batteries is a ‘drop-in’ technology. Graphite, the standard anode material in lithium-ion technology, shows very little capacity for sodium-ion storage (forming the compound NaC64 vs. LiC6). In contrast, disordered ‘hard’ carbons, are considered promising anode materials and provide good reversible capacity during sodiation/desodiation cycles.

As part of the ESE group, the Titirici group at the Department of Chemical Engineering studies the mechanism of Na-ion storage in carbons by tuning their structure (e.g., defects, porosity, graphitisation) and relate this information with the electrochemical performance. They aim to understand the different stages of ion adsorption at the several each type of possible porosity (e.g., open and closed) found within the hard carbon structure. More information on Na-ion batteries and dual-ion batteries can be found on their group website. 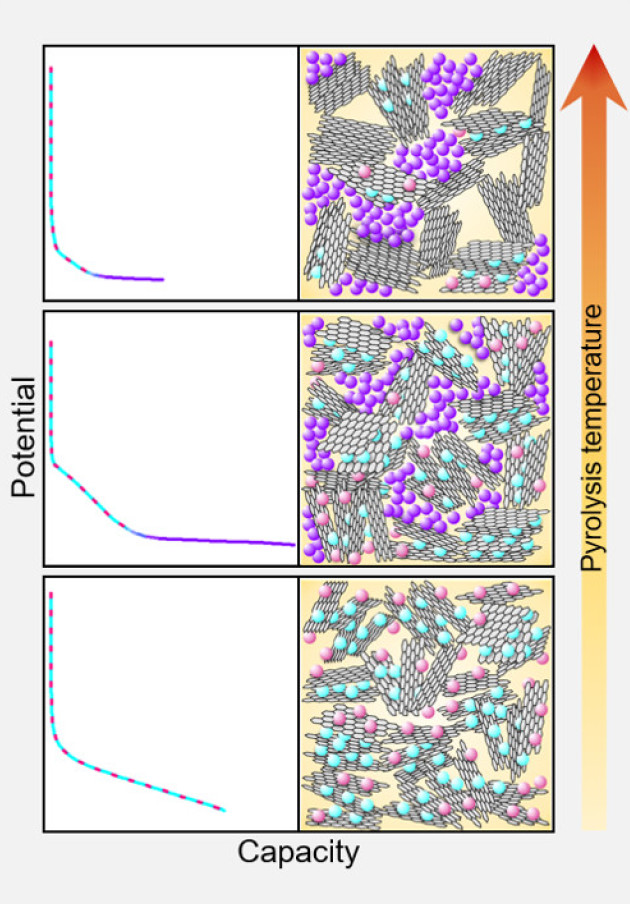 Hard carbons have shown considerable promise as anodes for emerging sodium-ion battery technologies. Current understanding of sodium-storage behaviour in hard carbons attributes capacity to filling of graphitic interlayers and pores, and adsorption at defects, although there is still considerable debate regarding the voltages at which these mechanisms occur. Here, ex-situ 23Na solid-state NMR and total scattering studies on a systematically tuned series of hard carbons revealed the formation of increasingly metallic sodium clusters in direct correlation to the growing pore size, occurring only in samples which exhibited a low voltage plateau. Combining experimental results with DFT calculations, we propose a revised mechanistic model in which sodium ions store first simultaneously and continuously at defects, within interlayers and on pore surfaces. Once these higher energy binding sites are filled, pore filling occurs during the plateau region, where the densely confined sodium takes on a greater degree of metallicity.