The Urban Energy Systems project was a collaboration between BP and a number of departments at Imperial College London. It was led by professors Nilay Shah and David Fisk. The project ran for five years, from 1 November 2005 to 31 December 2010, with BP providing around £5M of funding over this period.

Alongside the industrial involvement from BP the project brought a multidisciplinary view to the research, the groups at Imperial involved were:

Coordinated by Energy Futures Lab, the project developed a systematic, integrated approach to the design and operation of urban energy systems. This work provided case studies and tools to enable significant improvements in energy efficiency, and the environmental impact, of urban environments.

The interactions of cities with ecosystems are bidirectional and complex. Cities are major contributors to global environmental change and are also vulnerable to alterations in climate, sea level or disruptions of resource supplies. We study the dependence of urban systems on external resource inputs like food and energy carriers as well as their reliance on absorptive capacity in surrounding ecosystems for emissions such as CO2, solid waste and waste water. Various biogeocemical cycles are essential for of urban industrial processes. Among them air, water and nutrient cycles and the exchange of mineral resources and manufacturing products via trade. In comparing the city to an organism and applying the analogy of urban metabolism we address concerns of resource depletion (scarcity), excessive emissions (pollution) and disruptions of natural cycles which are central to improving urban sustainability. Life cycle thinking and cradle to grave analysis form the basis of this approach which addresses collective challenges of inter- and intra generational distribution of environmental risks. In this perspective the environmental responsibility of the urban system extends beyond the narrowly defined city limits but needs to account for the use of ecosystem services "upstream" and "downstream" of the urban production and consumption processes. Technological change in land use and transport systems as well as economic structure are contributing to the overall impact of cities on the natural environment. We are interested in the variation of environmental impacts of cities at different income levels and geographical locations. Similarly we are concerned about discrepancies in adaptation and vulnerability to global change.

Many promising low carbon energy technologies – for example distributed or renewable generation and energy efficiency initiatives – influence the network infrastructure that supports the flow of energy through cities. Some technologies, such as combined heat and power, also create links and interactions between supply structures (electricity, gas, heat, and perhaps coolth). We will model these citywide capital-intensive networks in technical detail, to evaluate how they might change in the future as cities move to become more sustainable.

Sustainability indicators are an increasingly common part of urban decision-making processes but such metrics are often poorly defined, limiting their effectiveness as meaningful policy inputs. By focusing on energy systems as a cross-cutting urban theme, a set of integrated indicators is being developed to probe questions of urban sustainability more directly. This research is also investigating headline measures of urban energy performance, such as energetic and exergetic efficiencies.

Environmentally friendly products and services have a hard time diffusing into a market for many reasons: They may not offer the same functionality to consumers as non-green products, or they may be more expensive when having the same functionality, or they may require changes in consumers' behaviour. Nevertheless, many studies find that consumers' hold a positive willingness-to-pay for green products and services, like electricity generated from renewable sources for example. This research stream analyses how consumers evaluate and adopt new environmentally-friendly products and services. The outcome of this research identifies barriers and drivers of the diffusion of new energy services. 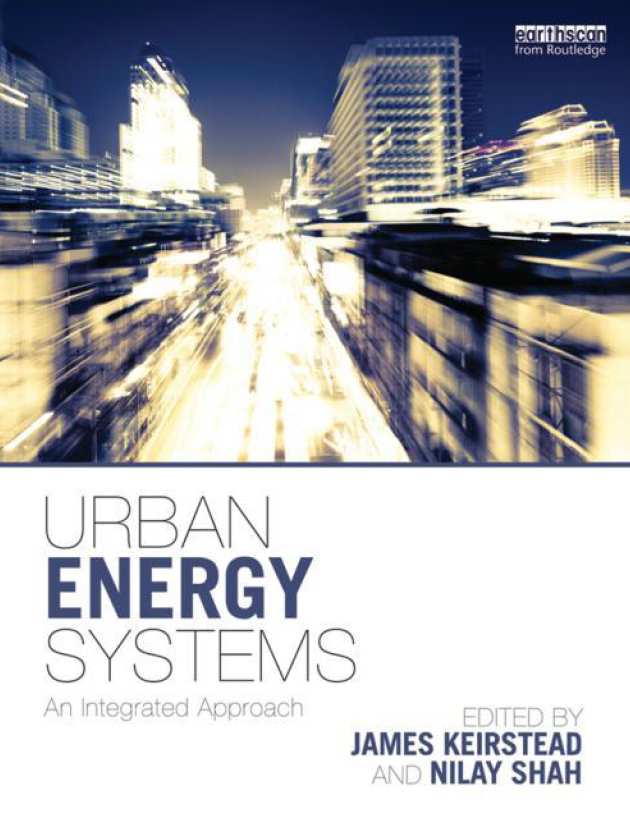 One major result of the project was the publication of Urban Energy Systems: An Integrated Approach (Earthscan, 11 February 2013).  Edited by Dr James Keirstead and Professor Nilay Shah, the book brings together the major lessons from the project and features a mix of case studies, modelling techniques, and background materials. The book is designed for teaching use at the advanced undergraduate or graduate levels but should also be of interest to practitioners and policy makers.

The team also developed the SynCity optimization and simulation toolkit over the course of the project.

The project also resulted in many papers, conference proceedings, reports, theses, student projects and contributions to other books.