The College established the annual Athena Lecture in 2001 to celebrate the achievements of women in science, engineering, technology and medicine. Each year we invite a successful woman to talk about her career and life.

You can learn more about our speakers in previous years and watch their videos below.

2017 - A journey from Physics to the Boardroom

She explores the challenges and joys of a career spent in the oil and gas industry, as well as sharing insights into managing both personal and professional change. In particular, she discusses lessons from her role in leading the integration of the $52 billion acquisition of BG Group by Royal Dutch Shell.

Imperial President Alice Gast speaks about the inspirations and hurdles that shaped her career.

She explains her research interests in surface and interfacial phenomena, in particular the physics of complex fluids, colloidal suspensions, micelles, membranes and proteins.

She shares insights into aircraft noise, which has been a recurring focus of her work. Although aircraft noise has reduced considerably since the introduction of high speed jet transport, it is still a major societal concern.

Professor Deborah Smith, OBE, Pro-Vice Chancellor for Research at the University of York, talks about her career journey, which has taken place on the crest of the molecular biology revolution.

Moving from classical biochemistry via molecular genetics to parasitology, her research has focused on investigating the role of Leishmania parasites in causing a spectrum of tropical diseases. The translation of her research is underpinning the development of drugs and vaccines for neglected infections, including the human leishmaniasis and African sleeping sickness.

2013 - From geek to glamour via a desert island

Professor Dame Athene Donald, University of Cambridge, discusses both her scientific work and career path as a female physicist.

She explains her research in soft matter physics and her work communicating science to the general public.

2011 - From Autoimmunity to Zebrafish

Professor Maggie Dallman gives an immunologist's view of the world

Professor Maggie Dallman speaks about an immunologist's view of the world.

She talks about her career investigating the inflammatory responses of organisms and how this could hold the key to treating life threatening conditions.

Professor Julia Buckingham explores cortisol and its role in stress

Professor Julia Buckingham, Pro-Rector (Education) at Imperial, describes her research about stress - a protective mechanisms which enable organisms to cope with adverse situations, which has fascinated scientists for many years.

The stress hormone, cortisol, has a particularly important role. Julia explores the mechanisms that regulate its secretion and illustrates the potential consequences of cortisol imbalance.

2009 - Insights and vistas in hyperbolic geometry

Professor Caroline Series describes some of the unusual features of hyperbolic

Professor Caroline Series, University of Warwick, talks about her career journey and describes some of the unusual features of hyperbolic geometry.

Abstracting the special features of hyperbolic geometry has led to  profound new insights, which in turn have been developed into remarkable new tools for understanding the geometry of three dimensional manifolds (the three dimensional analogue of surfaces).

2007 - Growing interactions: from individuals to systems

Professor Dame Julia Higgins, Principal of the Faculty of Engineering at Imperial, discusses how research and people have changed over her time at the College.

As well as her research, Julia also talks about her involvement in work at Imperial on gender equality.

Baroness Onora O'Neill, Principal of Newnham College, University of Cambridge, talks about the history and development of informed consent and gives her thoughts on how to improve current practice.

2015, Towards a silent aircraft, Professor Dame Ann Dowling, President of the Royal Academy of Engineering

2013, From geek to glamour via a desert island - how did I get here?, Professor Dame Athene Donald, University of Cambridge

2012, Inside the Brain, Professor Dame Nancy Rothwell, Vice-Chancellor of the University of Manchester

2011, From Automimmunity to Zebrafish - an immunologist's view of the world, Professor Maggie Dallman, Principal of the Faculty of Natural Sciences, Imperial College London

2008, The cerebral signature  for pain perception in health and disease, Professor Irene Tracey, University of Oxford

2005, Towards the Semantic Web: the power of networks, Professor Wendy Hall, University of Southampton

2004, Nuclear Power: A solution to climate change or a victim of its own history?, Sue Ion, British Nuclear Fuels Ltd 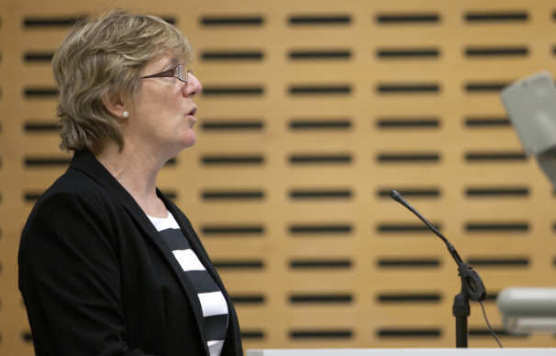