Literature and Lockdown: Reading for Pleasure

"The brain is wider than the sky." - Emily Dickinson

Exploring classic literature that continues to fascinate readers the world over, this ten-week class examines a range of seminal literary works in the context of both confinement and escape, considering the power of literature to engage with the restrictions of our lived experience while simultaneously illuminating and cultivating the demands of our imagination.

Whether self-isolating, social distancing or dreaming of venturing forth, Reading for Pleasure opens up ten celebrated short literary texts, considering major writers and influential fiction, poetry, and drama alongside a stimulating range of cultural, critical and political ideas from the 19th and 20th centuries.

No previous specialist knowledge of literature is necessary.

Each class session will look at a particular text in detail and discuss online (using Microsoft Teams) key elements of its style, form, themes and related contexts. Students are encouraged to read the relevant text in advance in order to get the most from their engagement and participation. Beyond an appetite for reading, you do not need to have any previous experience of studying literature to enjoy and learn a great deal from this course.

To take part in this class you will need an internet connected computer or tablet, together with a Microsoft Teams Account. Microsoft Teams accounts are free, but you do need to register for one in advance using the same email address with which you enrol on this course. We recommend you also download the Microsoft Teams App.

It is possible to take this course "passively" without a microphone and/or web camera attached to your computer, but if you want to take part in class discussions you will need at least a micorphone connected to your computer or tablet. Many computers, laptops and tablets already have these built in, but you might want to check on that first.

*** COURSE CANCELLED DUE TO INSUFFICIENT INTEREST ***

We begin in this session by looking at the work of the noted 19th century political activist Frederick Douglass, exploring his powerful Narrative of his journey from bondage to freedom in pre-Civil War America.

Herman Melville’s famous tale of a pallid scrivener working (and refusing to work) in Wall Street is a superb counterpoint to the expansive landscapes of Moby-Dick. The enigmatic story speaks to multiple concerns, from language, silence, power, the workplace, through to interrogating the nature of fiction itself.

In this influential Russian work, Fyodor Dostoyevsky captured a quintessential modern literary voice. Embittered, withdrawn, paranoid, and obsessed with the development of politics and society in the 19th century. Welcome to the Underground!

In this class we will look at a selection of Emily Dickinson’s brilliantly compressed poetry from the 1860s, looking at her interest in both representing and transforming circumscribed physical settings and the limitless spaces of her poetic imagination.

An important and complex story from 1892, Charlotte Perkins Gilman’s “The Yellow Wallpaper” is a key text in late 19th century Feminist writing and one that offers an influential and troubling reading of domestic spaces and confinement.

One of the greatest horror stories in literature, The Turn of the Screw is amongst Henry James’ most accessible works, while also capturing all the textured beauty of his style. A governess spends a lengthy period of time in a secluded country retreat with young children and begins to encounter strange happenings. The stuff of life’s nightmares becomes one of literature’s great pleasures.

Joseph Conrad’s masterful, suspenseful tale of a young sea captain faced with the challenges of command explores the trials of isolation and the demands of duty through a focus on secrecy, intimacy and solidarity. One of Conrad’s finest stories and a concentrated encounter with classic Conradian concerns.

Argentine writer Borges holds a unique place in world literature for his ability to contain brilliantly imagined worlds and possibilities in the form of highly compressed and idiosyncratic short stories. “The Aleph” looks at the plight of a king of infinite space bounded in a nutshell. What Maradona could do with a ball, Borges achieves with his pen.

Krapp’s Last Tape is one of Irish writer Samuel Beckett’s defining achievements; a short work that dramatizes an encounter with the unpredictable and fragmented spaces of memory alongside an enactment of the routine movements of the everyday. A memorable one-man play that asks some of Beckett’s favourite questions: who we were, who we are and who we might have been. Of what we will ultimately become, Beckett is in no doubt.

One of the finest works of late-20th century American literature, Housekeeping is a short novel detailing the lives of a family of women torn between the demands of domestic attachment, responsibility to self and the call of the road. Richly allusive and beautifully written, Robinson’s novel is a tale of orphans, escape, and the power of literary language.

Students are encouraged to read the relevant text in advance in order to get the most from their engagement and participation. 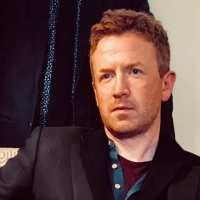 Dr Richard Niland has been a tutor/lecturer in literature for over 15 years and has published widely on Joseph Conrad and a range of other 19th and 20th century writers. The author of Conrad and History (2010) and editor of the Norton Critical Edition of The Secret Agent (2016), Richard has taught at the University of Oxford, the University of Strathclyde and also currently teaches at the City Literary Institute in London.

A Fellow of the Higher Education Academy and contributing editor to The Conradian, Richard is interested in the various intersections of literature, culture, politics, music and film in different global contexts.

Questions regarding the content and teaching of the above course should be addressed to the course tutor, Dr Richard Niland, r.niland@imperial.ac.uk.