Armed Conflicts and the Politics of the 21st Century

“War is what happens when language fails.” ― Margaret Atwood

The field of International Relations has long focused on the security of states and how best to preserve a peaceful balance of power among them. In the twentieth century, decolonisation processes led to a dramatic increase in the number of nation states. However, when many of them achieved their independence they were left lacking the crucial infrastructures, diversified productive sectors and human capital necessary to grow and provide for their populations.

In this course we will investigate the problems faced by a number of countries in the post-Second World War period as they sought to achieve stability and find their place in the world. We will consider development projects which set out to raise living standards and the problems that arose from Cold War politics as the east and west and their development agencies sought to “steer” newly independent states into their orbit and the connections this created between development and security.

As we shall see, since the end of the Cold War the concept of ‘security’ has been broadened and deepened to reflect a growing recognition of the fact that, for many people worldwide, the major source of harm does not emanate from other states but from concerns such as climate change, civil conflict, disease, malnutrition and authoritarianism.

What are the major sources of insecurity in the twenty-first century? Evolving understandings of security and insecurity and the concept of ‘human security’. Political and socioeconomic factors that have constrained security from WWII. The notion of ‘International Security’ and the related terminology used in international relations

2. The geopolitics of conflict from 9/11

4. The historical evolution of war

What place does military force have in the making of contemporary international relations? Can theory help in understanding the causes of war, and if so, can we elaborate models with a high predicting potential? When do we know if we are at war or at peace? How, why and to what extent has the use of military force changed?

5. Terrorism and war on terror. The prevalence of asymmetric conflicts

Is transnational terrorism the new weapon of the weak? is it so simple to understand global terrorism in terms of “us” vs “them”? What separates the likes of ISIS from ‘old’ terrorist organisations such as the IRA? What’s behind the perpetuation of conflict in Afghanistan?

Threats and insecurities that have arisen in the postcolonial territories. Contemporary problems of ethnic and religious conflicts in Asian regions, their origins, specific features and factors influencing their emergence. The Israeli-Palestinian conflict. The eve of India and Pakistan’s violent partition at independence.

Transnational threats such as health pandemics, climate change, scarcity of natural resources or arm trafficking. Which wars are ‘new wars’? How are nationalism and ethnicity implicated in these new wars? The case of Russian intervention in Ukraine.

8. The role of the United Nations and International Organisations

Why are the IMF, WTO and the EU classed as neoliberal institutions? What are the pros and cons of the economic order they have helped to usher in? Are human rights a matter of domestic or international politics? What are the impediments for a better functioning of the UN Security Council and the Peace Operations?

Security policies of the main military powers and their allies. Historical account of the North-Atlantic Treaty emerging from the earlier animosity between US and USSR. Comparison to the Warsaw Pact. What will happen to international stability as US leadership declines or turns away from these responsibilities.

10. New wars: Intervention vs non-intervention in the Syrian Civil War

A geographical area home to the most intractable agglomeration of conflicts: the Middle East. The origins and dynamics of the Syrian civil war: ‘The Arab Spring’. Main actors and interventions made in Syria: the use of force by the United States and Russia. Arguments in favor and against foreign intervention in Syria?

This programme may be subject to change.

There is no compulsory reading required for this course and there is no set course text.

Please ask the tutor if you would like suggestions for reading. 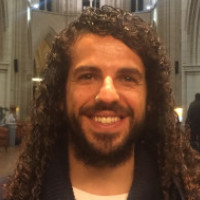 Pedro Teres has an academic and professional background in Mathematical Sciences, although he has been engaged with Social Politics and International Relations for the past ten years. This combination has provided him with a deep understanding on the social impact of scientific discovery and the logic challenges of socio-political discourse. He teaches Political Science and related subjects at Imperial and other universities in London and has conducted extensive fieldwork in armed conflicts, namely in former Soviet countries and the Middle East. He has participated in several initiatives with the European Parliament and the UNHRC among other intergovernmental institutions and works closely with civil society movements as a passionate political activist.