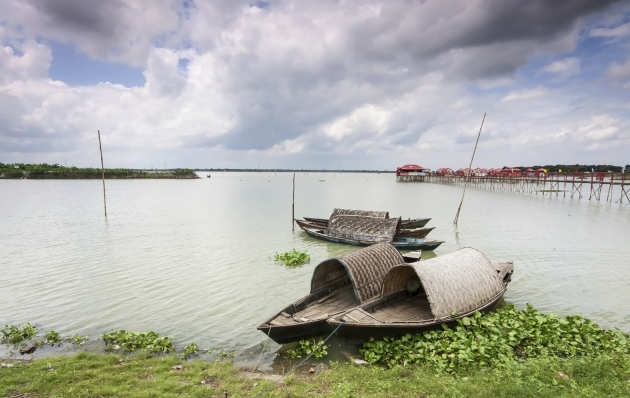 Sea level rise can result in salt water entering drinking water supplies in low-lying coastal areas. This increases the risk of health problems such as high blood pressure in local people who drink the water and can lead to preeclampsia in pregnant women. One of the worst affected countries is Bangladesh.

The goals of this research project are to:

Why is salt water intrusion a problem?

According to the World Health Organisation (WHO) guidelines, human consumption of salt should not exceed 5 grams per day. Evidence for the relationship between high/excessive salt intake (mainly due to consumption of processed foods) and cardio-vascular disease, such as heart disease, strokes and high blood pressure, has accumulated rapidly in the last few decades. In pregnant women excessive salt intake can cause gestational hypertension and (pre)eclampsia, the latter being one of the top five causes of direct maternal death.

In rural coastal Bangladesh, people eat few processed foods. However, drinking water in coastal regions has become extremely saline, such that people in the region get on average 50 - 100% of their recommended daily salt intake just from drinking water. Once dietary sodium is added to this, it is not difficult to see that the current salinity levels in drinking water have a significant impact on public health.

High drinking water salinity is found in deltaic areas around the world that frequently experience salt-water inundations. Climatic changes increase the inundation risk of vulnerable areas. The study area where we work, located in southwest Bangladesh, is one of most vulnerable areas in Southeast Asia. Due to the high population density, unprotected structure of most drinking water sources and lack of alternative (ground water) options, inundation-based salinization of drinking water sources is severe. Sodium concentrations above 1000mg/l had been measured in previous studies in the area. The IPCC reports to have high confidence that salinity problems in the study area – and similar deltaic areas around the world – will further expand in the near future. Populations in these deltaic areas are often poor and lack resources to obtain water from alternative sources; they fully rely on highly saline water. The current salinity levels were estimated to cause an additional salt intake in magnitude of grams for a large share of the population.

Last year, Imperial College found a clear dose response relationship between drinking water salinity and risk of hypertension in pregnant participants in Dacope, meaning that the saltier their drinking water was, the more likely they were to develop hypertensive disorders during their pregnancy.

The affected areas are located in the low-lying deltas of the Ganges, Brahmaputra and Maghna rivers. Given that these deltas range from 1 to 3 metres above mean sea level, they are inundated with water on a daily basis by the tides, which are up to a couple of meters in height. The people in coastal areas live on reclaimed land (polders), protected from high tides by embankments 2 to 4 m above the average sea level. The embankments are often overtopped and/or damaged by spring tides or cyclonic storm surges, and when this happens the inland areas are flooded with saline water. These floods contaminate the unprotected drinking water sources which are relied upon by local people.

Future sea level rise is likely to increase the height of the twice daily tides in the area as well as the height of the most extreme storm surges. With more than 70% of the coastal population relying on unprotected water sources, such as rivers, canals and specially constructed ponds for their daily drinking water this would further increase the excessive salt intake and the associated health problems in these areas. A one metre of sea level rise would inundate nearly 20% of Bangladesh and may make millions of people homeless.

The Departments of Epidemiology, and Civil & Environmental Engineering at Imperial College London are collaborating with the Department of Geology, University of Dhaka and the International Centre for Diarrhoeal Disease Research, Bangladesh (ICDDR, B) in a field study of the impact of drinking water salinity on population health. As well as seeking to understand the controls on salinity in drinking water sources, they are also looking at adaptation measures, particularly in response to anticipated impacts of climate change.

A possible intervention that is currently being investigated by the team is “managed aquifer recharge”. Rainwater and/or pond water is stored in the groundwater during the wet season so that it can be pumped up during the dry season, when salinity levels in conventional sources are usually at their highest. These installations are built by Dhaka University in collaboration with UNICEF. Besides the managed aquifer recharge initiative, various small scale rainwater harvesting projects are also being considered as an alternative for the high saline ponds, rivers and tube wells.

We are also conducting a so-called “intervention trial” whereby we look at the effect on health when people are offered lower-saline water from rainwater or managed aquifer recharge systems. The purpose of this is to find out whether the lower salinity drinking water has the effect of lowering the participants’ blood pressure, and with it the risk of hypertensive disorders and certain cardiovascular diseases.

We recruited all the participants last year and measured their blood pressure and their water sodium and potassium concentrations.  Some of the participants then switched to rainwater or managed aquifer recharge sources after the end of the rainy season last year. We expect the participants given fresher drinking water to have lower blood pressure than they did last year, and compared to those people who continued drinking conventional water sources, such as ponds and tube-wells. In the data analysis other factors that could affect blood pressure, such as physical activity, diet and smoking habits were taken into account as well.

Previous work at Imperial College looked at the effect of salt water intrusion on the health of pregnant women in Bangladesh. The work is summarised in this video.

Hidden dangers in the water

A Q&A with Pauline Scheelbeek on her research exploring the health effects of sea level rise.

A SciDev audio interview with Paolo Vineis and Mohammed Hoque.

Hidden Dangers in the Water

A short documentary on the impacts of salinity in the coastal areas of Bangladesh on pregnant women's health.

Transition to Zero Pollution is a flagship initiative of the Imperial's Academic Strategy, with a vision to realise a sustainable zero pollution future. The initiative brings researchers from different disciplines together to take a systems approach to tackling pollution in all its forms.
View our academic publications