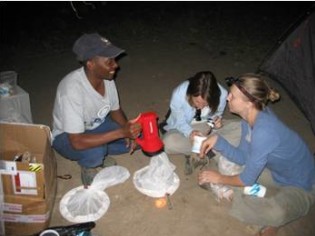 Dr Lauren Cator was inspired by a trip to Tanzania to help stop the spread of mosquito transmitted diseases. She now runs a lab at Imperial studying mosquito behaviour.

"As a child I loved being outside and was always interested in looking at the natural world. It was only much later I realised that it was something you could do as part of your job."

As a child I loved being outside and was always interested in looking at the natural world. It was only much later I realised that it was something you could do as part of your job.

I did my undergraduate degree in the United States and started off majoring in comparative literature. It wasn’t until halfway through I decided to switch to biology, and that is what has formed the basis of my career.

As part of my degree I spent a semester studying in Tanzania, where I got to see the impact that diseases like malaria have on people. That’s what solidified my interest in researching insects and the way they transmit disease.

What is your job now?

I now work as a lecturer at Imperial.

I run a lab that looks at the behaviour of mosquitos and using what we learn about mosquito biology to ultimately limit the transmission of disease.

We look at how we can use the tools we have more effectively, as well as developing new tools.

At the moment, we are focused on mating behaviour.

Several new control strategies involve rearing male mosquitoes in the lab and releasing them into the wild to mate with wild females. For that to work, the females have to be interested in mating with them, so I am current trying to work out what makes a sexy male mosquito!

Although I started working on mosquitos because I was interested in limiting the effects of malaria, my work is very much basic research. You have to replicate the results many times over to be confident enough to even publish them in an academic paper and this is only the first step on a long road to implementing these findings in a disease control.

However, this type of research is important. We know so little about mosquito behaviour that all kinds of surprising things which may ultimately be very important for disease control are waiting to be discovered.

What is your favourite part of your job?

I do still enjoy getting outside and travelling. We are currently planning a trip to Thailand, where we are working in collaboration with the Thai government on a project to test different ways of rearing mosquitoes in giant sealed cages.

Like every job, there are bits that are difficult or disappointing, but mainly I just get to play. I wake up every day excited to go to work. I don’t know many people who can say that about their job.