An introduction to the robot hardware

Why use a robot?

Prostate surgery is time consuming by virtue of its prevalence, and if done using traditional methods, can be uncomfortable for the surgeon. Although the surgery itself is not difficult, mistakes can lead to a variety of operative or post-operative problems:

The possibility of such problems means that the prostate should be cut accurately and in a controlled manner. Although skilled surgeons are quite capable of such tasks new surgeons may make errors resulting in some of the problems above. A separate project is underway to provide a training aid for new surgeons.

A robot is capable of accurate and repeatable cutting, does not mind working in uncomfortable surroundings and can be easily monitored as it progresses.

What type of robot?

Many industrial robots are available which consist of an anthropomorphic arm (i.e. with a shoulder, elbow and wrist, and appropriate tool or gripper where a hand would normally be), and for initial feasibility trials a Puma robot was indeed tried in the laboratory. However, this is not practical for medical purposes as robot manufactures usually forbid the use of their robots in close proximity to humans (let alone inside humans!). This is because the working environment for such robots is usually large and unconstrained. To circumvent this problem we designed our own robot with a small working environment, constrained to the size of the prostate. This consists of three axes of movement and a fourth axis to move a resectoscope cutter, as shown in the following simplified drawing. 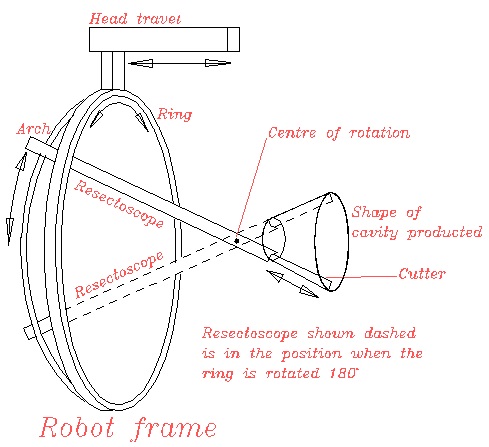 The geometry of such a robot allows a cavity to be hollowed out from within the prostate.

The robot is controlled by a pair of programmable embedded motor control systems, which are in turn controlled by a i486DX2 based PC. This provides the user interface and program to generate the correct cutting sequence to remove tissue from the prostate.