Closed-loop adaptation in the central nervous system (CNS) is critical for force control during grasping. Mechanoreceptors on the hand, for example, detect force and position information throughout grasping, and transmit such information such that force may be modulated by the CNS. However, the role of this feedback as it relates to brain-function, in particular during force control, is not well understood. Robotic tools provide an intriguing tool to explore this interaction, however the majority of robotic grasping systems rely solely on visual cues for user sensory feedback. Haptics aims to provide tactile sensory feedback sensory to the user through mechanical surface stimulation, electrical surface stimulation, or direct stimulation of peripheral nerves via implantable electrodes. While degrees of success have been achieved with each of these modalities individually, a robust, cost-effective system has yet to be developed. Furthermore, no such system has been fused with implantable brain-robot interfaces for robotic control; a complete system closing the loop with signals recorded and extracted directly from the brain would provide a new basis for research in both robotic control and brain function during grasping force control.

This project is co-supervised through the Medical Research Council Brain Network Dynamics Unit at the University of Oxford. 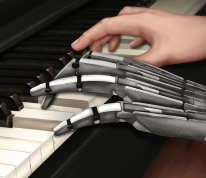