This project will investigate the fundamental principles of using guided ultrasonic waves to create a map of defects in a complex shell structure. The pipe application above is essentially one-dimensional with low feature density (bends, stiffeners, joints, branches etc).  Recent research has extended the concept to the scanning of simple plates, again with low feature density, e.g. the detection of corrosion in petrochemical storage tanks. A major step forward, which will be the topic of this new research project, would be to develop such a scanning technique for structures with higher feature density.  This is very ambitious, but it would open up this idea to a vastly wider range of applications, such as aircraft structures, ship structures and containments with stiffeners.  The difficulty is that the waves will both reflect and mode-convert at the structural features as well as at the defects, creating complex reflection signals which will have to be interpreted.  This will necessitate the use of higher frequencies and higher modes than have been considered to date, and will require work in wave mechanics, transduction, and signal processing. 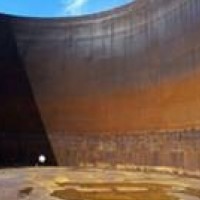