Andrew Amis joined the Biomechanics Group in 1979, as a (very) junior Lecturer, following a short period post-graduation as a designer at Rolls-Royce Aeroengines in Derby, then a PhD and postdoctoral contract in the Bioengineering Group for the Study of Human Joints at the University of Leeds.

The PhD project was concerned mostly with measuring the joint kinematics, contact areas and analysing the muscles in order to derive the forces on the elbow during highly-loaded activities.

The work in Leeds led to the design and clinical trial of an elbow prosthesis and related instruments, which was patented and licensed to Howmedica for manufacture. The clinical work was in collaboration with Mr Jim Miller, of Glasgow Royal Infirmary. 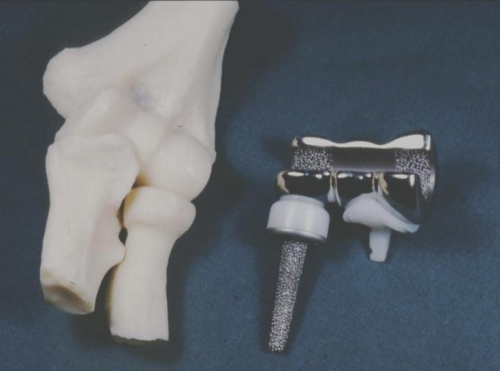 A spin-off from the total elbow prosthesis was a system of radial head prostheses, for use in unstable fracture-dislocations of the elbow. These implants are still marketed by Stryker and by Corin.

Concerns about joint stability led into work on artificial ligaments, with work initially on carbon fibres, but later on polyester fibres. This included collaboration with Professor Jimmy Campbell and Dr Susan Kempson, of the Edinburgh University Veterinary School, who used the implants for a large series of injured dogs' knees, and studied the tissue reactions to the fibres, showing the formation of new collagenous tissue on the polyester scaffold.

The polyester ligament system was then engineered for human use, including extensive fatigue-creep testing, in collaboration with DePuy Ltd and DuPont Ltd. A multi-centre clinical trial was set up, with particular collaboration with Mr Sadhan Mukherjee, of Airdrie Hospital, who introduced arthroscopic methods.

Although artificial ligaments fell out of use, the work on the stability of the knee continued, with early work examining the roles of fibre bundles within the cruciate ligaments; that led to development of double-bundle ligament reconstruction methods which gave a closer approximation of natural knee laxity behaviour. This led to membership of both the Anterior and Posterior Cruciate Ligament Study Groups, and Andrew was the inaugural International Research Professor of the ACL Study Group in 2003.

A related line of work was the measurement of complex knee instabilities, and work to attach electromagnetic sensors directly to the bones of patients during ligament surgery, and then later to splints for mounting the sensors on the skin, for routine clinical use.

In addition to research work, Andrew has acted as a consultant and expert witness for a number of areas of work, includingimplant design, failures of orthopaedic implants, industrial injuries, and non-accidental injuries of infants.