Dr Andrew Ashley’s research interests pivot around the catalytic activation of dihydrogen into proton and hydride equivalents, in order to bring about a step change in the reactivity of the hydrogen molecule with reducible substrates. Systems capable of such a transformation are the recently discovered ‘Frustrated Lewis Pairs’ (FLPs) which are based on non-metal components such as amines and Lewis acidic boranes. In conjunction with efforts to design new thermally and hydrolytically stable FLPs, novel metal-based systems capable of effecting the reversible splitting of hydrogen are also being investigated. The primary goal is then to effect the hydrogenation of important small molecules (which are coordinated to transition metal based co-catalysts), mediated by sequential ‘proton coupled hydride transfer’ using activated hydrogen. Since hydrogen can be synthesised from the splitting of water using renewable solar energy we can obtain routes to the chemical storage of hydrogen and thus energy.

UTILISATION OF THESE STRATEGIES ENABLES the design of multi-component systems to sustainably effect the:

In the case of carbon monoxide this is known as the Fischer-Tropsch (FT) process and is currently performed heterogeneously and at elevated temperatures and pressures; it generally exhibits poor selectivity. Since carbon monoxide can be made through the hydrogenation of carbon dioxide (albeit endothermically), conducting this reaction in parallel with a homogeneous FT reaction (strongly exothermic) would enable the conversion of carbon dioxide and hydrogen into energy-dense liquid hydrocarbons for use as carbon-neutral ‘green’ fuels, or feedstock chemicals (carbon sequestration). Such co-catalysts are based on mid-late transition metals of the 1st and 2nd row.

The Haber process produces all synthetic ammonia from dihydrogen and dinitrogen that humans use for fertiliser to improve agricultural yields and hence help feed the world population. However, it does so at an immense energy cost (ca. 2% global energy demand) due to operation at high temperatures and pressure. Since iron is used in this process, and an iron-only nitrogenase has been discovered in Nature, co-catalytic dinitrogen iron(II) complexes are the focus of this research to devise a pathway for nitrogen hydrogenation at ambient temperatures and pressure.

Many aspects of these transformations are applicable to an industrial context, where reactions are often conducted at high temperatures. Accordingly the design of new thermally robust ligands and their coordination complexes is an important aspect of our current methodology. All targets are homogeneous systems which are amenable to study using conventional techniques (e.g. NMR and IR spectroscopy) and thus offer the benefit of improving product selectivity through rational ligand modification. 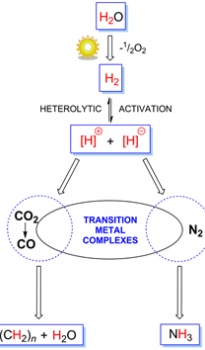