Mechanism of neurotoxicity induced by α-synuclein.

Oligomeric species populated during the aggregation process of α-synuclein have been linked to neuronal impairment in Parkinson's disease and related neurodegenerative disorders. By using solution and solid-state nuclear magnetic resonance techniques in conjunction with other structural methods, we identified the fundamental characteristics that enable toxic α-synuclein oligomers to perturb biological membranes and disrupt cellular function. More information on our Science article. α-synuclein Membrane Interaction. α-synuclein (αS) is a protein involved in neurotransmitter release in presynaptic terminals, and whose aberrant aggregation is associated with Parkinson’s disease. We have used a combination of solid-state and solution-state NMR spectroscopy to characterise the structure and dynamics of αS bound to synaptic-like lipid vesicles. The research, in collaboration with the Veglia lab at the University of Minnesota (USA) and Dobson lab at University of Cambridge (UK), can be accessed via the Nature Communications website. 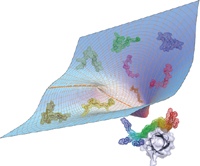 Conformational Recognition of Intrinsically Disordered Proteins. Understanding the conformational properties of intrinsically disordered proteins is a top priority in biophysics. We have addressed the interaction between the disordered Gab2 and its receptor Grb2 using a combination of NMR, calorimetry and statistical mechanics. The work, in collaboration with the Feller group in Oxford, has been published as a New and Notable on the Biophysical Journal. See original work and Commentary. Figure from Davide Mercadante. 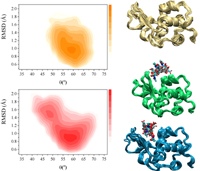 Enzymes can increase the rate of biomolecular reactions by several orders of magnitude. Although the steps of substrate capture and product release are essential in the enzymatic process, complete atomic-level descriptions of these steps are difficult to obtain because of the transient nature of the intermediate conformations, which makes them largely inaccessible to standard structure determination methods. We describe here the determination of the structure of a low-population intermediate in the product release process by human lysozyme through a combination of NMR spectroscopy and molecular dynamics simulations. We validate this structure by rationally designing two mutations, the first engineered to destabilise the intermediate and the second to stabilize it, thus slowing down or speeding up, respectively, product release. These results illustrate how product release by an enzyme can be facilitated by the presence of a metastable intermediate with transient weak interactions between the enzyme and the product. Read more

Water is the "solvent of life". In addition to have played a key role in the evolution of biomacromolecules by defining the rules that govern protein folding or macromolecular interactions, water is also an active biological molecule. In this work we have studied the role of water in supramolecular chemistry by quantitatively pointing out the effect of the release of high energy waters in the binding properties of cucurbit[n[urils. These are interesting macrocyclic molecules with huge potential for technological applications. Our results can be applied to rational design in protein science. More details here. 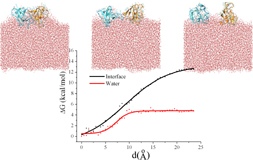 We investigated how highly flexible regions influence dangerous protein-aggregation pathways owing to unfavourable entropic terms. With this model, we showed how the hydrophobin EAS employs intrinsically disordered regions to avoid aggregation in the cellular mileau and to allow functional amyloid self-assembly at the air-water interface. Read the full article here 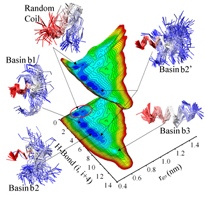 We have recently shown a powerful approach to characterise highly dynamical states of proteins and peptides by means of Metadynamics and NMR. Read the full article here. 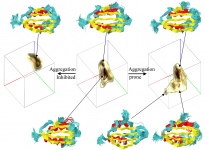 The structure and dynamics of an amyloidogenic intermediate were resolved by means of advanced combinations of NMR and restrained molecular dynamics simulations. The study, in collaboration with the Dobson's Lab in Cambridge, allowed us to determine the energy barriers that allow functional dynamics to occur under physiological conditions while preventing dangerous aggregation-prone conformations to be populated. Read the full article here