In vivo dynamic autoradiography using PET is a multidisciplinary science requiring the fusion of physical, chemical, biological, pharmacological, clinical and technical expertise.  The role of radiochemistry in PET is described, and the impact of ligand selection and design criteria on in vivo radiotracer studies is discussed. 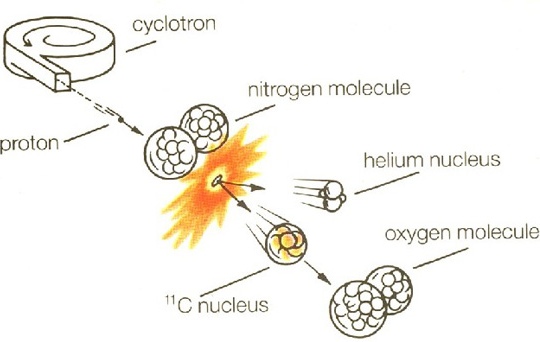 In PET, the most commonly used positron emitting radionuclides are cyclotron produced  11C, 13N, 15O and 18F, the characteristics of which are summarised below: 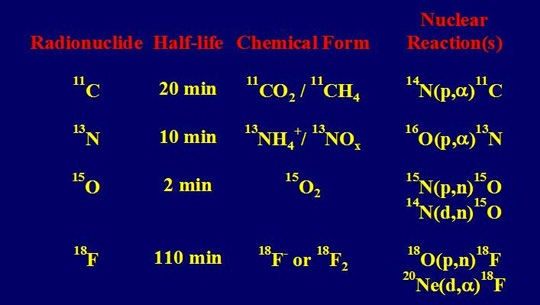 As will be noted from the table above, the commonly used positron emitting radionuclides have rather short half lives. This has a number of ramifications:

Specific Radioactivity (more commonly referred to as specific activity) is defined as the amount of radioactivity per mole of compound. For 11C and 18F, the specific activity of the radionuclides delivered from the cyclotron is typically 100-1000 GBq/micromole (3 - 6 Ci / micromole), at least three orders of magnitude higher than that typically achieved with tritium (3H). As a consequence, labelling chemistry is performed on a sub-micromolar scale, and the mass of radiopharmaceutical injected into a subject is low (usually less than 10 micrograms). PET is therefore a true tracer technique allowing PET investigations to be performed at sub-pharmacological doses, even with very potent compounds. 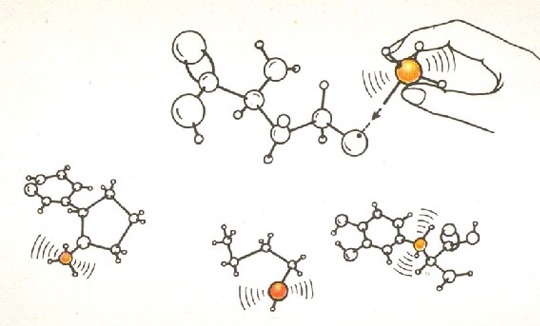 The commonly utilised positron-emitting radionuclides (see Table) are obtained from the cyclotron in simple molecular or ionic forms. These primary precursors, although sometimes used directly as labelling agents, are often converted into a more reactive chemical entity to allow incorporation of the label into a molecule of interest. Fig 1. shows a few examples of some of the more commonly produced secondary precursors obtainable from cyclotron produced 11C-carbon dioxide within a few minutes. 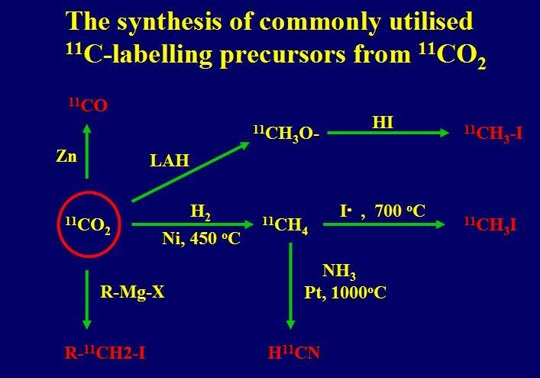 Figure 2 shows an example of the utility of the secondary precursor, 11C-methyl iodide, in labelling the active enantiomer of 11C-rolipram, a radioligand developed for probing second messenger function by PET. 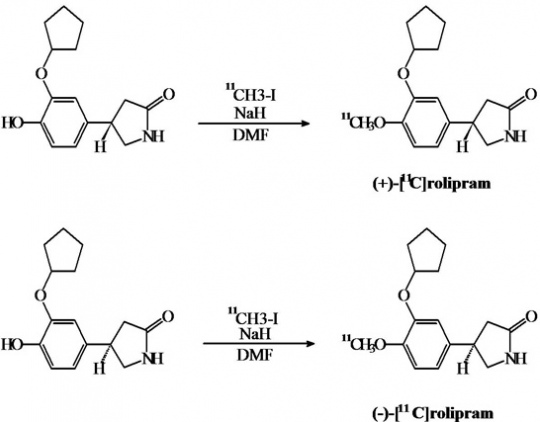 Once a target molecule has been labelled, rapid purification methods are required to remove potential radiochemical and chemical impurities in the crude product. This is usually performed using semi-preparative HPLC. Sterility of the product is usually achieved by passage of the formulated radiopharmaceutical through a sterile 0.22 um filter into a sterile vial. Quality control of the radiopharmaceutical generally includes testing for chemical and radiochemical purities using analytical techniques such as reverse phase HPLC, gas chromatography, prior to the release of the product for administration to a subject.

PET radionuclides decay by the emission of positrons (the antimatter equivalent of an electron) which, which upon encountering an electron (e.g. in tissue), are subjected to a matter-antimatter annihilation where their combined mass is converted into two high energy (511 KeV) gamma rays emitted approximately 180o apart. In the PET scanner, an array of radiodetectors are aligned around the organ of interest. The simultaneous detection of two gamma ray emissions from different detectors allows the identification of a line of response between the two detectors along which the decay event occurred. The superimposition of millions of these lines of response over the entire scanning session allows the construction of an image of the bodily distribution and time-dependent concentration of an administered PET radiotracer in the organ under study. 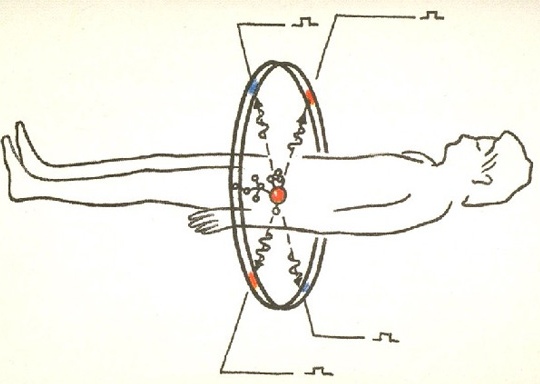 Working with high energy gamma rays also has consequences for staff working with the radiolabelling and technical handling of PET radiotracers. This usually requires the utilisation of remotely operated, automated or robotic devices and suitable lead shielding. The short half lives of the radioisotopes means, however, that long term storage of radioactive waste is minimised.