The overall theme of my research is the application of particle physics theories to cosmology. This is a field that is rapidly growing and gaining importance. Particle experiments such as the LHC at CERN and cosmological observations such as the Planck satellite are producing new data which can tell us a great deal about the very early Universe. However, making full use of them requires new, more sophisticated theoretical methods to carry out reliable calculations in the quantum field theories of particle physics. This direction of research will become even more important in the future because particle accelerator experiments will not be able to reach significantly higher energies that the 14 TeV limit of the LHC. Therefore cosmology is the only realistic way of probing physics at much higher energies.

The main focus of my research is on determining observable signatures, such as density perturbations or gravitational waves, produced by non-equilibrium field theory events in the early Universe, for example the end of the period of cosmological inflation or symmetry-breaking phase transitions predicted by the Standard Model of particle physics and grand unified theories. On one hand, these studies provide new ways to test fundamental theories about inflation and high energy physics, and on the other hand they can shed light on some of the deepest puzzles about our Universe such as the origin of matter.

Another central area of my research is the physics of topological solitons in quantum field theory, for example magnetic monopoles. These hypothetical particles with magnetic charge are predicted by string theory and grand unified theories. I am involved in the MoEDAL experiment, which is looking for magnetic monopoles and other exotic particles produced at the LHC.

Amazingly, there are also many similarities between the fundamental theories of particle physics and some condensed matter systems such as superconductors, superfluids and spin ices. I am exploring these connections, trying to find ways to to do "cosmology in the laboratory" - test cosmological theories with laboratory experiments.

I enjoy doing outreach and telling school children and the general public about my research, and about cosmology and particle physics more generally. I have visited several schools both in the UK and in Finland. If you would like to arrange a visit, place let me know. Some talks I have given recently are:

I have also given public talks, for example as part of Pint of Science, and Worldcon 75, and participated in popular science events such as Science Uncovered, I'm a Scientist and Royal Society Summer Science Exhibition, where I was the lead organiser of the Monopole Quest exhibit in 2015. 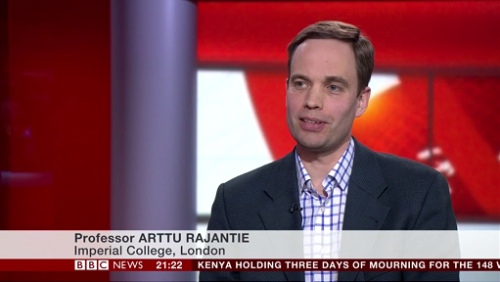 These videos show the formation of the string network in two simulations with different cooling rates. The colours of the walls show the phase angle of the Higgs field in the Coulomb gauge. In the early parts of the videos, the white areas show the bubbles of the broken phase (high value of ÃÂÃÂÃÂ2) and in the later parts, they show the areas where the symmetry is unbroken (low ÃÂÃÂÃÂ2), i.e., the strings.

The dark side of the universe, Churchill College, Cambridge, 2005