My research in ICF and MIF focuses on synthetic diagnostics and burn physics. Synthetic diagnostics are computational models of the experimental observables produced from integrated simulations of experiments. These are important tools for comparing simulations with experiments. My work in burn physics includes understanding how a hot, dense plasma evolves as nuclear reactions occur. I am also interested in the development of pulsed neutron sources and in nonlinear systems, particularly the phenomenon of transient chaos.

A key parameter for assessing the performance of ICF experiments is the temperature of ions during the burn phase. The energy spectrum of neutrons produced by fusion reactions is dependent on the ion temperature. Accurate modelling of ICF experiments can be used to infer the ion temperature from the neutron spectra measured in experiments. To do this successfully we need to understand how other physical processes, such as fluid motion and hydrodynamic gradients, affect the neutron spectrum. The above image shows slices of plasma density (left), ion temperature (centre) and plasma fluid velocity (right) taken from a 3D radiation-hydrodynamics simulation of a NIF indirect-drive ICF experiment at the time of peak neutron output. There is significant turbulent motion of the plasma in the hot regions. The image below shows the energy spectra of neutrons emitted in the direction of the white arrow when (i) red - only thermal effects are included in the spectrum model, (ii) green - thermal and bulk fluid effects are included, (iii) blue - thermal, bulk fluid and hydrodynamic gradient effects are included. The sensitivity of the spectra to the non-thermal effects makes it challenging to measure the ion temperature in ICF experiments.

The MagLIF concept involves the addition of a large magnetic field to a hot, dense deuterium-tritium plasma. The magnetic field reduces energy losses from the plasma meaning that ignition and energy gain can be achieved at lower plasma density than in ICF. Computational models are used to understand how the magnetic field strength and topology can be inferred from secondary neutron spectra.

The Dense Plasma Focus (DPF) is a device which uses large electric currents (~100kA-3MA) to implode plasma and produce sub-microsecond bursts of fast neutrons. MHD and kinetic modelling of the DPF helps us to understand the physical processes occurring in the device and to optimize the neutron yield. 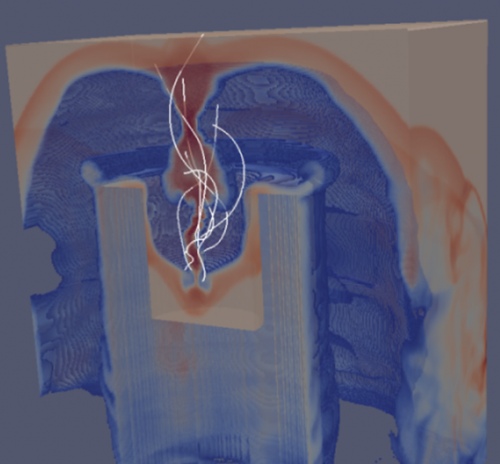 This image shows the trajectories (in white) of ions accelerated by the electromagnetic fields in an imploding deuterium dense plasma focus with a 500 kA current. These ions can react to produce neutrons.

Transient chaos is chaotic motion with a finite duration. Its transient nature means that it cannot be studied using standard asymptotic methods. The Bunimovich stadium billiard is a system that displays transient chaotic behaviour. This system consists of an infinite number of point particles that reflect from the stadium boundary. By introducing a moving leak into the boundary of the stadium billiard we can study how particle dynamics evolve within the billiard.