We work on signalling systems in plant development and defence, that allow plants to function in an integrated manner. The greatest present challenges are to identify novel regulatory molecules and their targets. Fortunately, functional genomics enables us to address these questions directly. In particular, we can exploit proteomics and transcriptomics in combination with the widespread availability of mutants and transgenics. We have also invested time in developing tools for studying systemic signalling in Arabidopsis, especially micro-grafting and sap sampling. We have published on both phloem (Corbesier et al. 2007; Truman et al. 2007; Zhang et al. 2010) and xylem (Foo et al. 2007) systems. For plant defence against aphids, we are particularly interested in species-wide diversity of both pest virulence and host resistance (Kanvil et al. 2014) and in genetics of aphid effectors (Kanvil et al. 2015). 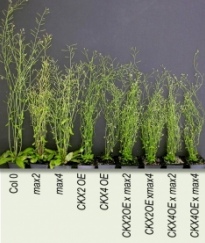 We aim to understand how systemic signalling regulates shoot architecture, and then to examine possibilities for novel means of regulating the extent of branching. Potato tuber bud dormancy is regulated by similar signals and we have recently been addressing the major industry problem of sprouting in storage. There are many further instances in agriculture, horticulture and forestry where yield, quality and net value of crop species are closely linked to stem numbers.

Shoot branching model predict multiple hormone signals, some of which are systemically mobile via xylem or phloem. One of these was identified as strigolactone (Gomez-Roldan et al., Nature, 2008), derived from carotenoid cleavage pathways. We are attempting to define the molecular and biochemical regulatory relationships between strigolactones and the traditionally recognised branching regulators, cytokinin (Foo et al. 2007; Young et al. 2014) and auxin. Strigolactone defects (max mutants) and cytokinin deficiency (ipt  knockouts or CKX overexpression) have very different and additive effects on phenotype (see image above). We have also been examining cytokinin distribution and perception at the cellular level using cell sorting in conjunction with high sensitivity mass spectrometry (Antoniadi et al. 2015, 2020). 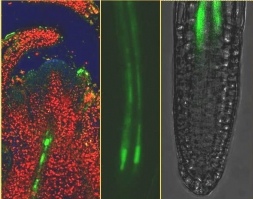 Florigen(s) - mobile substances that control flowering - have proved elusive for decades. But we now know that macromolecules - mRNA and/or proteins - rather than small molecule hormones may be responsible. Using our Arabidopsis grafting methods and confocal microscopy, we discovered that biologically active GFP fusions to a key photoperiod pathway protein, FT, can be transmitted through the phloem towards the shoot apex. The images here show graft transmission of FT:GFP into shoot tip (left) and root tip (middle, right). Based on this and other experimental evidence, we proposed that FT protein itself is the active and mobile florigen hormone (Corbesier et al. 2007). We are now using proteomics and biochemistry to screen for additional components of the signalling complex, and to search for new ways to reliably manipulate flowering time. 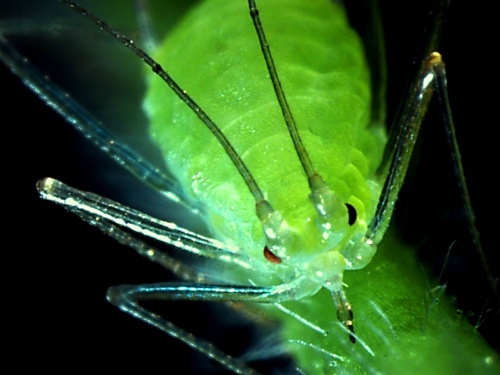 Aphids are major worldwide crop pests that cause damage by feeding on phloem sap and frequently by acting as vectors for transmission of numerous viruses. Although some aphid resistance genes have been identified in host plants, very little is known of aphid genetics in relation to why some genotypes are highly virulent on particular hosts and not others. It is postulated that aphids most likely deliver effector molecules into the host, in an analogous manner to effector delivery from bacterial and fungal pathogens. Recognition of these effectors and mounting of defences will depend on the host carrying appropriate R-genes. This project is examining inheritance of virulence and avirulence in pea aphid on defined genotypes of the host species Medicago truncatula, and attempting to associate these phenotypes with genetic and molecular differences between aphid clones.

If you are a biological sciences student interested in plant signalling in development or defence, please get in touch at c.turnbull@imperial.ac.uk. We encourage potential students to develop their own projects centred on any of the four main areas in the lab:

Antoniaidi,I, Regulation and function of the plant hormone cytokinin as a long distance signal