Serovars of Salmonella enterica cause important human and veterinary diseases. They invade and replicate within host cells, including epithelial cells and macrophages. Human typhoid fever is usually caused by Salmonella Typhi. Salmonella Typhimurium on the other hand causes gastroenteritis in humans and a systemic disease in mice resembling typhoid fever. The emergence of multiple drug resistant strains of Salmonella, and the desirability of an improved vaccine against typhoid fever, reinforce the need for studies into the mechanisms underlying Salmonella pathogenesis.

Our group studies molecular aspects of Salmonella pathogenesis, focusing in particular on the functions of bacterial genes required for survival and replication of Salmonella in host cells. In 1995 our group invented a technique called signature-tagged mutagenesis (also termed barcoding) and used it to identify numerous genes of Salmonella Typhimurium that are required for bacterial replication in macrophages, and which have a crucial role in the systemic phase of the typhoid-like disease in mice. Many of these genes are clustered in a pathogenicity island (SPI-2) on the Salmonella chromosome. These genes encode a multi-protein machine known as a type III secretion system (T3SS), which translocates effector proteins from intracellular bacteria across phagosomal membranes into host cells. The effector proteins help to create a specialized compartment - the Salmonella-containing vacuole (SCV), and enable bacterial replication in host cells. Acidification of the lumen of the SCV leads to expression of SPI-2 genes, assembly of the T3SS and secretion of translocon proteins. Following formation of the translocon pore in the vacuolar membrane, the bacteria sense the near-neutral pH of the host cell cytoplasm, and this causes a switch to secretion and translocation of effectors into the host cell (see Yu XJ, et al Science. 2010 328:1040-3 DOI and Commentary on that paper (Science 2010 328:981-2 DOI). For an animation depicting the pH-based secretion switch, please see below.

We use multi-disciplinary approaches, involving molecular genetics, biochemistry and cell biology, to understand the functions of the T3SS effectors, and how their collective action enables the intracellular replication of the pathogen. Studies of mutant strains and individual effector proteins have demonstrated that the SPI-2 T3SS has several different functions. We have shown that two of the effectors are involved in regulating vacuolar membrane dynamics: mutation of one of the corresponding genes (sifA) causes a striking phenotype in which the vacuolar membrane around bacteria is lost. 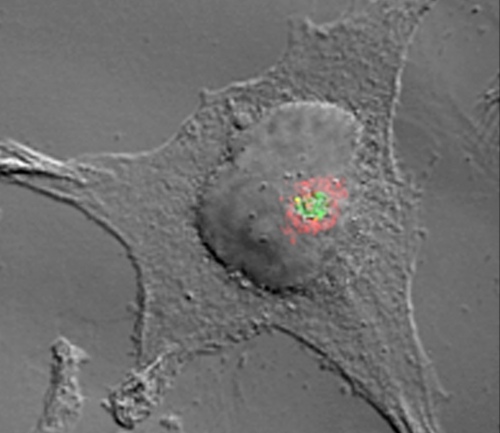 Figure 1: Association between Salmonella (green) and the Golgi network (red) inside an epithelial cell

The effectors SseF and SseG are required for localisation of SCVs close to the Golgi network in epithelial cells (Figure 1), which is necessary for proficient intracellular bacterial replication. SseL functions as a deubiquitinase, and is involved in SPI-2-dependent cytotoxicity of macrophages. SpvC is a phosphothreonine lyase, causing irreversible inactivation of MAP kinases, and interference with immune signalling. SteC is a kinase required for a meshwork of F-actin associated with SCVs in infected cells (Figure 2). 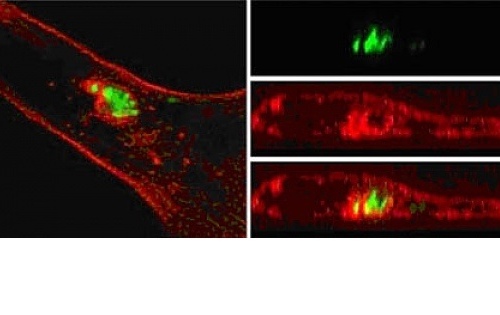 Figure 2: Salmonella (green) induces the polymerisation of a meshwork of F-actin (red) during intracellular replication

Recently we have developed methods based on fluorescence dilution to analyse intracellular bacterial replication at the single cell level. We found that in macrophages and infected animals, a surprisingly large proportion of the bacterial inoculum fails to replicate. Some of the non-replicating bacteria enter a persistent or dormant-like state (see Helaine et al., Proc Natl Acad Sci U S A. 2010 107:3746-51). DOI.