Extracellular matrix (ECM) is assembled from secreted macromolecules by a combination of spontaneous and cell-assisted processes. Cells interact with ECM using membrane-spanning receptors that critically regulate cell behaviour. Many human diseases are the result of faults in ECM assembly or cell-matrix communication: for instance, defective adhesion of skeletal muscle cells to ECM causes muscular dystrophy, and the loss of regulation by ECM is a key step in the progression of many cancers.

The broad aim of my research programme is to understand ECM assembly and signalling at the molecular level. We determine atomic structures of ECM proteins using X-ray crystallography and investigate their interactions using a variety of biochemical and biophysical techniques.

The heterotrimeric laminins are a major constituent of basement membranes, which are a type of ECM that underlies all epithelia and surrounds muscle cells. Laminin polymerisation is mediated by the LN domains at the tips of laminin's three short arms. We determined the structure of the LN domains and, in collaboration with Peter Yurchenco (Rutgers University), showed how they interact to form the nodes of the laminin polymer (Hussain et al, 2011; Purvis and Hohenester, 2012; McKee et al, 2021):

The laminin polymer is anchored to the cell surface by interactions of the LG domains with cellular receptors, such as integrins and dystroglycan. In 1999, we proposed that some LG domains may function as calcium-dependent lectins for the then uncharacterised carbohydrate modification of dystroglycan, which is an essential receptor for muscle function (Hohenester et al, 1999). In collaboration with Kevin Campbell (University of Iowa), we subsequently confirmed this prediction by elucidating the atomic details of this important protein-carbohydrate interaction (Briggs et al, 2016): 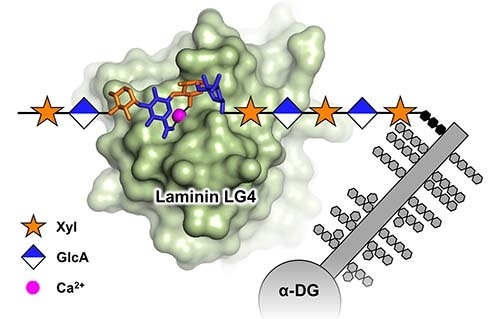 A long standing question has been why integrins recognise only laminin heterotrimers, and not any of the single chains. Our structure of a heterotrimeric laminin-111 fragment revealed how the α1, β1 and γ1 chains combine to form a functional integrin binding site (Pulido et al, 2017): Collagens are the major structural proteins of vertebrates, but they also serve as ligands of two unusual receptor tyrosine kinases, DDR1 and DDR2, which are dysregulated in many cancers. In collaboration with Birgit Leitinger (National Heart and Lung Institute), we defined the structural basis of sequence-specific collagen recognition by DDRs (Carafoli et al, 2009) and determined the structure of the complete DDR ectodomain (Carafoli et al, 2012). These results have helped formulate a mechanism for transmembrane signalling by DDRs. More recently, we revealed the mechanism of kinase autoinhibition in DDRs (Sammon et al, 2020).

The degradation of collagens is carried out by matrix metalloproteinases (MMPs). In collaboration with Hideaki Nagase (Kennedy Institute of Rheumatology) and Richard Farndale (University of Cambridge), we determined the long-elusive structure of MMP-1 bound to a triple-helical collagen-like peptide, which revealed how the enzyme is targeted to the unique cleavage site in fibrillar collagens (Manka et al, 2012). We also determined the structure of an endocytic receptor (Endo180) that clears the collagen fragments generated by MMPs (Paracuellos et al, 2015).