Major efforts are now being launched which seek to control disease caused by parasitic helminths in human communities. Research in our group is geared towards aiding this process by achieving a better understanding of the transmission dynamics, population biology, spatial ecology and molecular genetics of these parasites using a combination of field, laboratory and theoretical approaches. Our studies focus particularly on the mosquito-borne helminthiasis, lymphatic filariasis, which is estimated to afflict some 120 million people in the tropics, and against which a global control programme is currently being launched.

We are using field data on community exposure intensity, and patterns of infection and disease in conjunction with mathematical models in order to investigate filariasis immunoepidemiology. A key finding from recent work (Fig. 1) is that significant acquired immunity to infection with this parasite may occur only in communities exposed to high transmission. Chronic disease may increase in communities disproportionately with transmission intensity; for lymphoedema, this rise may be further exacerbated in areas of high transmission by the onset of immunopathology. The implication of transmission-driven immunity for infection control using mass chemotherapy is that it is likely to lengthen the period of control needed to reduce infection prevalence to a defined threshold (Fig. 1). These results suggest, firstly, that filarial epidemiological patterns are related to transmission pressure and, secondly, that control efforts will need to vary with parasite endemicity or transmission. We are working with collaborators from Tanzania to investigate this topic using a combination of geographic and epidemiological analyses of age-prevalence data. 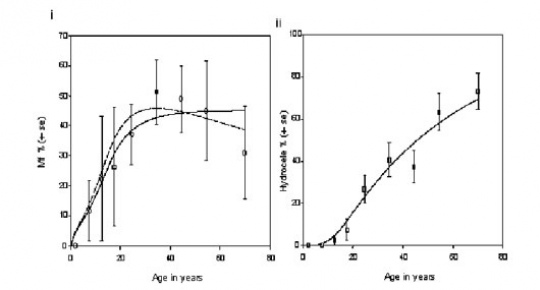 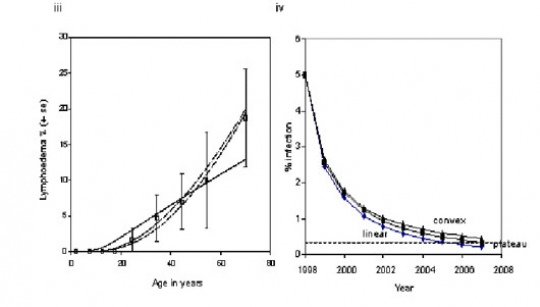 Figure 1. Transmission model fits to filarial infection and chronic disease age-profiles from a community exposed to high parasite transmission in coastal Tanzania depicting in (i) and (iii) the impact of host immunity in regulating infection and lymphoedema prevalence (dashed lines representing immune models in each case as opposed to solid lines which represent corresponding models with no immunity). Hydrocele prevalence in endemic communities appears to be direct function of transmission intensity (ii) (from Michael et al (2001) Parasit Immunol 23, 373-388). (iv) A simulation of the impact of mass chemotherapy on filarial infection prevalence showing that for a given pre-control community prevalence, the impact of acquired immunity (lined labelled `convex`) will be to increase the period of control needed to produce the corresponding levels of reduction achieved in communities with no immunity (the linear and plateau lines).

Realistic transmission models ultimately will also require better understanding of (1) the dynamics of infection, in particular the role of density-dependent processes, within the vector population and (2) the sources and impact of heterogeneity to observed infection and disease patterns, both key topics of current empirical work being undertaken by the group. A significant result of our analysis of exposure heterogeneity using a novel molecular biological tool for quantifying host mosquito biting rate (Fig. 2), relates to the finding that there may be clear age/gender dependencies in potential human exposure to this infection, which may underlie the observed marked aggregation of this parasite in endemic communities. 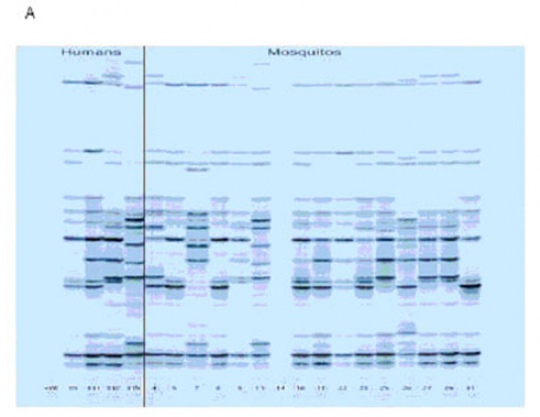 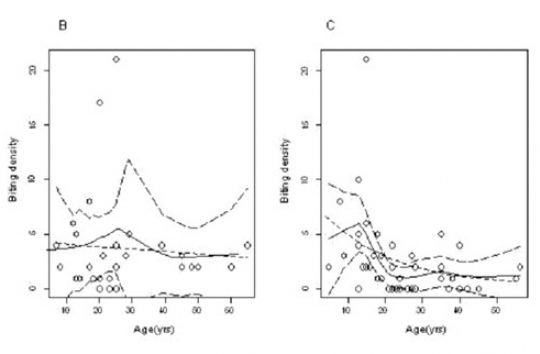 Figure 2. (a) Autoradiogram derived from applying a 9-locus multiplex STR system to human blood samples and bloodmeals of parallel mosquitoes sampled from a pilot study household in Pondicherry, South India. The DNA banding patterns depicted in the figure clearly show that PCR fingerprinting of Culex quinquefasciatus bloodmeals provides a reliable tool for identifying and hence estimating the biting rate by these mosquitoes on exposed individuals. (b) and (c) Age-distribution of the estimated Culex quinquefasciatus biting density/night per individual using the PCR tool among males and females showing evidence for a slight age effect in mosquito biting for males but significant nonlinear age-dependency in biting density for females.

We are developing microsatellite markers for Wuchereria bancrofti and Brugia malayi as well as beta-tubulin markers (shown to be associated with resistance to benzimidazole anthelmintics among strongylid nematodes) for W. bancrofti, to help understand the epidemiological and control significance of genetic heterogeneity in these worms. Our previous work on the beta-tubulin gene in the human intestinal parasitic nematode Trichuris trichiura has highlighted the likelihood of differences between phylogenetically distant worm species in nucleotide diversity in this locus, which suggests that caution must also be exercised when making predictions about mechanisms of filarial benzimidazole resistance from work carried out in the strongylids. We suggest that only a thorough analysis of each beta-tubulin encoding locus, similar to that performed for Trichuris, will allow the addressing of this topic for this worm.