My work focuses on the role of the Ets-related gene ERG in regulating endothelial gene expression and angiogenesis.

Angiogenesis is the growth of new blood vessels and is an important natural process that occurs during wound healing and development. However, abnormal blood vessel growth underlies many diseases, including cancer, age-related blindness, diabetic ulcers, stroke and cardiovascular disease.

Angiogenesis involves the sprouting of endothelial cells from existing blood vessels in a tightly regulated process that requires the integration of signals from growth factors, adhesion molecules and other cellular pathways.

Specialised endothelial tip cells, which are highly motile and extend numerous filopodia, lead the outgrowth of the vessel sprout towards gradients of VEGF. 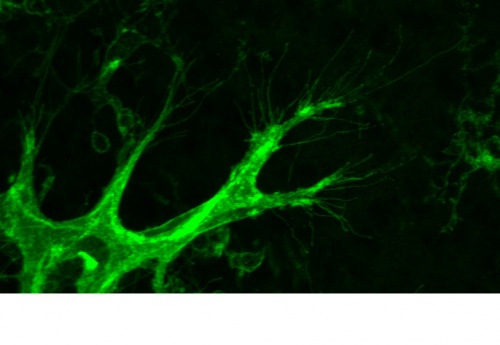 Sprouting angiogenesis in the developing mouse retina at postnatal day 6.

Angiogenesis depends on the dynamic regulation of endothelial cell gene expression. There is a complex network of transcriptional regulators that have a fundamental role in regulating the precise temporal and spatial co-ordination of the expression of multiple genes during angiogenesis.

We have shown that Erg is required for endothelial monolayer stability, endothelial cell survival and angiogenesis - partly through driving expression of the adhesion molecule VE-cadherin. Birdsey et al (2008) Blood 111(7): 3498-506

To understand in more detail the molecular mechanisms regulating angiogenesis, we make use of a number of techniques including: 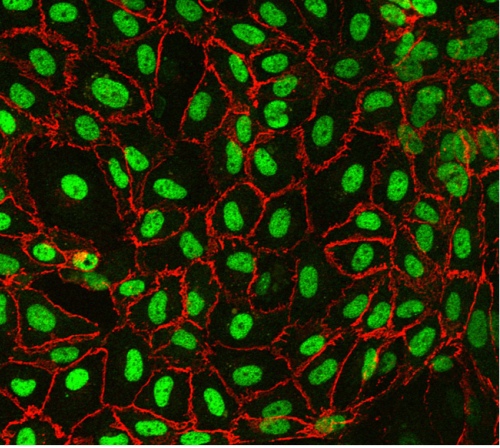 Erg and VE-cadherin staining in HUVEC.

Recenlty, we have used these approaches to define a role for Erg in regulating endothelial cell migration, a key process during angiogenesis. Microarray analysis of Erg-deficient endothelial cells identified over 80 genes involved in cell migration as candidate Erg targets, including many regulators of Rho-GTPases.  Live cell imaging of Erg-deficient endothelial cells showed decreased migration in a scratch-wound assay, along with a reduction in lamellipodia formation and disruption to the actin and tubulin cytoskeleton.

The regulation of cell migration and cell signalling by Erg has recently featured in an Italian comedy film called "Into Paradiso", directed by Paola Randi. We provided images of migrating cells for the film's opening title sequence.

Regulation of vascular development and angiogenesis by the ETS transcription factor ERG, Joint Meeting of the European Society for Microcirculation (ESM) and the European Vascular Biology Organization (EVBO)., Pisa, Italy, 2015

Molecular and Cellular Mechanisms of Angiogenesis, University of Chester, UK, 2009