My research explores the many consequences of impacts in the solar system through the development and application of numerical impact models.

Environmental consequences of impacts on Earth

The major themes of my research are described below.

If you are considering a PhD in my research area, please get in touch if you are interested in the following projects or to discuss related research ideas:

The 65.5 Ma, K-Pg mass extinction event was triggered by a large impact that formed the Chicxulub crater, Mexico. My numerical simulations have aided geophysical interpretation of the Chicxulub crater [1,2,3,4], Mexico, and constrained the impact energy of this major event in Earth history, which wiped out more than 70% of species [5].

Read more: Formation of the Chicxulub crater, Evidence of rock fluidization at Chicxulub, why the Chicxulub impact was a perfect storm; and the first day of the cenozoic.

Cratering on the Moon

I am interested in how large asteroid impacts shaped the Moon’s crust during its early evolution. My recent work [6,7,8,9,10] has provided new insight into the relationship between observed crater diameter and asteroid size, and helped to constrain the mass flux of asteroids in the inner solar system, which has implications for accurate dating of planetary surfaces, delivery of volatiles to the Earth-Moon system since its formation, and the severity of early bombardment in the inner solar system.

Read more: Formation of the Orientale basin. An ancient fragment of Earth on the Moon? An objective of NASA's InSight mission currently operational on Mars is to measure the rate of small impacts on Mars. My contribution to the mission is to aid these efforts by simulating the impact of small meteoroids on Mars and the seismic signals generated. This involves modelling both the fragmentation of small meteoroids as they travel through Mars' tenuous atmosphere as well as the seismic waves and cratering motions produced when the surviving fragments strike the ground.

Read more: A new crater near Insight and the seismic detectability of small impacts on Mars.

NASA's Double Asteroid Redirect Test (DART) mission, which launches in 2022, will test and investigate how effectively a spacecraft impact can deflect a small asteroid. This experiment will act as important validation for numerical simulations of the impact. My research has simulated the DART impact and shown that the outcome of the collision will depend quite sensitively on the properties of the target asteroid Dimorphos.

Read more: The effect of asteroid properties and layering on the DART impact outcome. Small asteroid fragments enter Earth's atmosphere all the time, producing meteors or fireballs in the sky. While events that can cause damage are rare smaller fragments that produce bright fireballs and drop meteorites are relatively common. Monitoring the sky for these fireballs helps to measure the frequency of impacts on Earth and increase the chances of recovering any surviving meteorite fragments. My group helps to run the UK Fireball Network, which is part of the Global Fireball Observatory. Cameras in our network recorded the Winchcombe meteorite fireball and helped to recover the meteorite and determine where in the solar system it came from.

Read more: The science behind the Global Fireball Observatory, the hazard of airbursts and how to model them.

Impacts in the Early Solar System 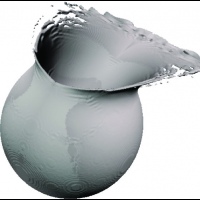 My research aims to quantify the thermal consequences of impacts on asteroids, the parent bodies of most meteorites. Meteorites are a window into the early solar system as they contain a physical record of the processes that occurred during its inception. In the past, impacts were not regarded as important in the thermal evolution of asteroids. My recent research has shown that, on the contrary, impacts on porous asteroids cause more localised heating than previously thought [11] and that this localised heat is retained for tens of thousands of years, consistent with heating and cooling rates inferred from meteoritic evidence [12]. This has prompted a re-evaluation of the importance of collisions in the thermal evolution of the early solar system [13].

Numerical investigations of impact crater formation have traditionally been limited to 2D vertical impacts, which are rare in nature, because of the computational expense of more realistic oblique impacts. I have co-developed a new, efficient 3D numerical impact simulator, and used it to quantify the effect of impact angle on crater size and shape [14,15,16]. The results have been used to derive the first estimates of the size-frequency distribution of elliptical craters on the terrestrial planets [17].

A focus of my research is to understand the role target heterogeneity plays in the formation of the multiple concentric-rings that characterize large terrestrial impact craters. Without a quantitative model of how these rings form it is impossible to associate a ring feature with the energy of the impact, and hence identify its true “scale.” Quantifying the relationship between impactor properties and final crater shape is critical for understanding the immediate environmental consequences of an impact, and for accurately assessing the hazard posed by impacts. My numerical modelling work suggests that strength variations in layered targets can change substantially the size and shape of the crater formed during an impact, and lead to multiple-ringed impact structures. This is exemplified by my research on the Chesapeake Bay crater, the largest impact structure in the USA, which showed that during the formation of the crater the upper target layers behaved in a fluid-like manner, leading to a broad outer crater in the sediments and a smaller inner crater in the basement rocks. This work overturned the previous interpretation of the crater as a typical extra-terrestrial peak-ring crater, and revised the impact energy down from much larger prior estimates. The work helped select the location of a recent successful USGS drill hole into the crater.

In my research I develop, manage and employ numerical models for the simulation of impact events and other violent, dynamic geologic processes. The impact software I develop, iSALE, is used by >150 scientists world-wide at >20 institutions. iSALE includes advanced physics-based material strength and porosity compaction models specifically designed for impact simulations.

I have developed a simple-to-use interactive web program to estimate the consequences of asteroid and comet impacts on Earth.

The site allows users to calculate consequences ranging from the size of the crater and the probability of such an event occurring, to the speed of the winds from the blast wave and

thermal radiation from the hot vapour plume. Results from the calculator have also been used for scientific research: the science behind the calculator was published as a journal article, and resulted in a new discovery about Barringer crater, Arizona.

I also investigate the hazard of other important, closely related, large, energetic surface processes, such as long-runout rock avalanches and large tsunamis generated by earthquakes and landslides [18,19,20,21,22].

Jacobs,CT, Modelling of Multiphase Flows on Adaptive Unstructured Meshes with Applications to the Dynamics of Volcanic Ash Plumes