Research Interests: The interplay of kinases and phosphatases in cancer

Dr Giamas’s group is focused on identifying novel kinases and phosphatases and elucidate their role and contribution in the development of cancer.

Over two-thirds of breast tumors express the Estrogen Receptor-alpha (ERα) and patients with ERα+ disease respond to anti-estrogens (tamoxifen-(Tam)), estrogen withdrawal (aromatase inhibitors) or ERα downregulation (fulvestrant). However, resistance frequently occurs with tumours recurring as metastatic. Mutations in ERα are rarely found; instead other mechanisms have been associated with tamoxifen resistance, among them phosphorylation of ERα. Apart from regulating transcriptional activity of ERα, phosphorylation at multiple sites also alters its stability.

Taken together, we believe that deciphering the mechanisms of LMTK3 action will reveal fundamental insights into the role of ERα signaling in endocrine resistance and metastasis, and derive new druggable targets. 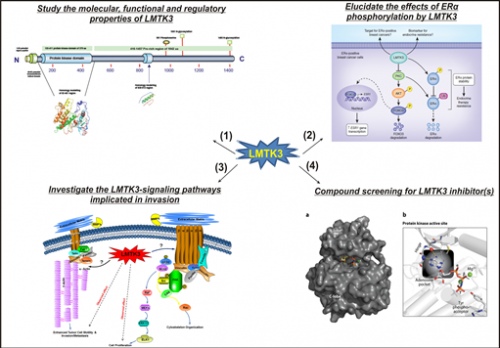 Clarifying the molecular, functional and regulatory properties of LMTK3 (aim 1) will provide us with additional information that will help us elucidate the involvement of LMTK3 in the regulation of ERα (aim 2) as well as its contribution in the development ERα-dependent and ERα-independent mediated metastatic processes (aim 3). In parallel with these goals, we will be working in identifying novel kinase inhibitor(s) for LMTK3 (aim 4) that can be used i ultimately in the future for in vivo and pre-clinical studies.