John Mansfield Research Overview
My research addresses several aspects of plant/microbe interactions. On the plant side I am interested in mechanism of resistance including basal defences mediated by the recognition of microbe associated molecular patterns (MAMPS) such as flagellin.  In terms of pathogens, the principle focus is on the evolution of bacterial pathogenicity to plants. Acting as the link between these two topics is work on effector proteins produced by Pseudomonas syringae. The potentially dual role of effectors, as suppressors or inducers of resistance, may reflect the evolution of plant pathogen interactions occurring in the following sequence. 1)  Effectors initially evolved within prototype pathogens to overcome basal defences in eukaryotes. 2) In plants, recognition systems based on R genes allowed specific detection of injected effector proteins, triggering the HR and establishing gene-for-gene interactions.  3) Loss of the recognised effector has often allowed pathogens to continue parasitizing resistant varieties of their hosts (to break gene-for-gene mediated resistance) because other effectors are able to suppress basal defences.  The evidence for such a sequence is, however, based on limited functional analyses of very few effectors. My long term goal is to determine the validity of this simple hypothesis and this will be tackled by analysis of individual components of the interaction using new "omics" and imaging technologies where appropriate.

We are using variation between accessions to identify genes involved in basal defence including analysis of the efficiency of flagellin perception by alleles of FLS2. Linked to this work is a study of the role of receptor like proteins in resistance (BBSRC support). 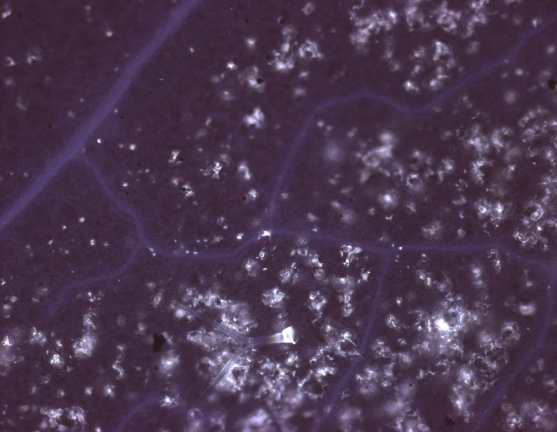 2. Metabolomics of plant defence in Arabidopsis

and in particular the role of plant cell wall alterations in the restriction of bacterial colonisation. We are using NMR and  LCMS-based approaches to characterise indolic and phenolic compounds cross linked onto the plant cell wall as a component of basal defence. Our metabolomics data are  combined with immunocytochemistry and confocal microscopy (using FLIM technology) to characterise autofluorescence at reaction sites (BBSRC support with Murray Grant now at the University of Exeter).

3. Mode of action of the effector AvrPtoB. The mechanism by which AvrPtoB suppresses basal defences is being studied using transcriptomic and proteomic approaches.  We have evidence for global suppression of MAMP-mediated responses. Plant targets of AvrPtoB are being sought based on protein interactions and the proposed activity of AvrPtoB as an E3 ubiquitin ligase.

AvrPtoB promotes the virulence of P. s. pv. phaseolicola RW60 to Arabidopsis and beans. Truncation of AvrPtoB from the C terminus ( deletion series) of the protein leads to loss of virulence function in bean and Arabidopsis. From de Torres et al 2006, Plant J. 48:368-382.

4. Evolution of virulence in Pseudomonas syringae pv. phaseolicola. We have developed a system allowing loss of the effector avrPphB to be followed within the infected bean plant. Loss of avrPphB involves deletion of a chromosomal genomic island and leads to increased virulence on cultivars lacking the R3 resistance gene. By following the deletion of avrPphB we should be able to learn about the control of chromosomal arrangement and gene exchange that drives the emergence of new pathotypes of Pseudomonas  (BBSRC support for a joint project with Dawn Arnold UWE, Bristol).

5. Plant responses to aphid feeding. This is a new collaborative project with Glen Powell and John Rossiter. The biochemical mechanism underlyng resistance to aphid colonisation are being studied (BBSRC support).

Reactions of broad bean leaves to aphid feeding; note autofluorescence in phloem and xylem at the probe site.