In plants, electrons from photosynthesis are added to carbon dioxide in the Calvin cycle to fix carbon. Another important reduction is that of nitrogen to ammonia by the nitrogenase enzyme. Nitrogenase is complex, with three structural proteins, and many more assembly factors. We are investigating the structural basis of nitrogenase resistance to oxygen, which is important for biotechnological applications of this enzyme.

Photosystem II (PSII) is the membrane protein-pigment complex which uses visible light photons to drive the oxidation of water (H2O), to oxgyen (O2), protons and electrons. After other reactions, the electrons are used to drive the reduction of carbon dioxide to organic molecules. Photosystem II generates almost all of the oxygen in the atmosphere, and is ultimately responsible for the fixation of most of the biomass, and fossil fuels on the Earth. Without PSII, the Earth would be much less hospitable to life. Apart from its intrinsic biological interest, replicating artifically the reaction of Photosystem II is vital for developing "artificial photosynthesis", the use of sunlight to generate fuels.

We are studying ways to mimic the catalytic activity of photosystem II by engineering other proteins to bind a cluster of metal atoms in a similar way to the natural system. We are also working on the structures of proteins related to the assembly and repair of the PSII reaction centre. 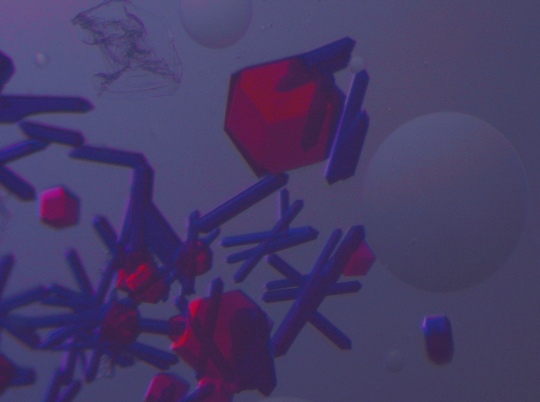