Bouncy Bioglass is published - it can be 3D printed and it self heals.

I, Science feature on Professor Jones

Julian Jones featured in BBC Radio 4's In their Element, talking about Li in glass 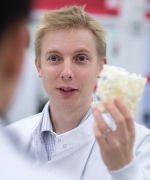 Julian Jones is a Professor of Biomaterials. Prior to this he held a  Royal Academy of Engineering/ EPSRC Research Fellowship (awarded 2004), having completed his PhD here in the department in 2002. He joined the Department having obtained an MEng in Metallurgy and the Science of Materials from Oxford in 1999. His research interests are in biomaterials for regenerative medicine, particularly Bioglass related materials. His team's work on inorganic/ organic hybrids has produced tough and flexible bioactive scaffolds suitable for tissue engineering applications.

He has written 3 textbooks:

2019 Tian Sang awarded the Matthey Prize from Imperial, for his PhD

2019 Paul Jones awarded the Matthey Prize, from Imperial, for his PhD

2018 Julian Jones elevated to Fellow of the Society of Glass Technology.

2018 Francesca Tallia awarded "Italy Made Me" prize for achievements in Physical and Engineering Sciences, by the Italian Embassy in London in collaboration with AISUK (Association of Italian Scientists in the United Kingdom), Il Circolo and other Italian academic associations.

2015 Prof Jones' review article is one of the all time top 3 in Acta Biomaterialia, and is free to access.

2013 Louise Connell awarded her PhD without any corrections needed

2013 Daming Wang awarded his PhD without any corrections needed

2012 New Book: Bio-glasses: An Introduction, written in an accessible style for those new to the field Bioglass textbook

2011 Bobo Yu and Sheyda Labbaf are both awarded their PhDs

2010 Dr Gowsihan Poologasundarampillai award the 2010 Matthey Prize by the Department of Materials, Imperial College London for the best PhD by a RSM associate.

2009 Dr Jones appointed as a Fellow of the Institute of Materials, Minerals and Mining (IOM3) - FIMMM

2009 Oliver Mahony (PhD student) won an Imperial College Student Award for Outstanding Achievement, an annual award to students for outstanding achievement in any extramural activity that brings credit to the College. Oliver represented Great Britain in the World Rowing Championships in Poland in August 2009.

2009 Dr Jones awarded a Rector's Award for Excellence in Research Supervision at Imperial College, following nomination by his students

2008 Olga Tsigkou (Post-doc) won the 2008 June Wilson Memorial Lecture Award. She wins £1000 for her resear ch. The award was set up by June''''s husband, Professor Larry Hench to commerate his late wife''''s pioneering work on tissue/ biomaterial interactions. The award is for excellence in biomaterials, tissue engineering or patho logy research by a young female scientist.

2007 3D image analysis image selected by the journal Biomaterials as one of the 12 best images from their publciations of 2007 and featured in a ''''year in images'''' commemorative poster.