In the UK thousands of people are diagnosed with bowel cancer each year (40,695 in 2010), with a five-year survival rate of 54%. Through the UK's National Bowel Cancer Screening Programme a large number of colonoscopies are carried out annually, leading to an improvement in polyp (a type of lesion found in the colon) detection rates. Once a polyp is discovered standard procedure dictates that it is removed and sent for histopathological analysis (gold standard for diagnosis of dysplasia) to determine if it is an adenomatous type, which has the potential to develop into cancer. However, many small polyps discovered (approximately 40%) are subsequently identified as hyperplastic, which do not have the potential to develop into cancer. However, if polyp pathology could be reliably determined during endoscopy then some polyps could potentially be left in situ or removed and discarded immediately without lab examination. This would decrease the risk of bowel injury for the patient, reduce the burden on the histopathologist and reduce costs for the hospital.

My research proposes to address these problems using optical imaging techniques that measure the spectral properties of reflected light from illuminated tissue in human patients. I have developed a new clinical imaging system enabling 'Optical Polyp Testing for In vivo Classification' (OPTIC) that aims to discriminate between hyperplastic and adenomatous polyps during colonoscopy. This consists of a mini endoscope that can be inserted in the standard colonoscope during an examination, once a polyp has been discovered. It then collects data on the optical properties of the polyp by measuring how it reflects white light (hyperspectral reflectance) and how it emits light when illuminated with blue laser light (hyperspectral autofluorescence). These signals are sensitive to blood content in the tissue, oxygen saturation, tissue structure and cellular metabolism, which vary depending on the type of polyp being investigated.

If cancer is detected in the bowel then minimally invasive surgery (MIS) may be used to remove the affected segment. Following resection an anastomosis is performed to rejoin the healthy ends using sutures or staples. However, damage to the local blood supply may result in inadequate oxygen supply to the region, resulting in the potential risk of the join breaking down and leaking. This represents a serious complication associated with high morbidity and mortality.

A separate system to image the spectral reflectance of tissue under white light illumination has been developed for use with rigid endoscopes in minimally invasive surgery. The spectral signals enable the surgeon to visualise quantitative maps of tissue oxygen saturation (StO2), which indicate how well a particular tissue is supplied with blood, and how the procedure has affected it. We have used this system during bowel anastomosis surgery to show how StO2 changes during the operation, as well as how it recovers in the weeks following the procedure.

Spectral imaging techniques build up a series of images of tissue at different wavelengths (λ) to form a 3D “datacube” (x, y, λ) with a characteristic reflectance spectrum at each point. This is accomplished using a tuneable filter or filter wheel in front of the camera. Various approaches exist to assemble this datacube. In vivo imaging challenges such as motion artefacts and low light throughput can be addressed using computer vision techniques based on motion tracking and 3D reconstruction. Our group has developed a system consisting of a monocular laparoscope, tuneable filter, focussing lens and monochrome camera which has been used to monitor changes in perfusion during surgery. Images were collected in the visible region of the spectrum (440-700 nm) and a linear least squares regression model used to estimate the relative concentrations of oxy- and deoxyhaemoglobin (HbO2 and Hb, respectively). The blood perfusion (Hbt) and oxygen saturation (StO2) of the tissue could then be assessed by evaluating Hbt = HbO2 + Hb and StO2 = HbO2/Hbt. Figure 1 show an oxygen saturation image of the bowel, acquired using the system. 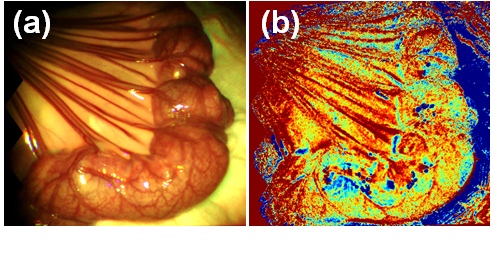 Fig. 1. (a) Colour and (b) SaO2 images of the small bowel (porcine) reconstructed from multispectral data acquired with a laparoscopic LCTF system.

This technology has also been applied to monitoring of the uterus during transplant surgery, and tracking haemodynamics during vascular procedures.

Quantification of the surface shape of tissue is of potential use for detection of subtle lesions, or for implementation of augmented reality guidance. The latter is of particular significance where a preoperative 3D dataset, such as an MRI scan of a tumour, could be overlaid on the surgeon's field-of-view using online measurements of the 3D shape of the tissue.

We have developed a system for 3D imaging that uses a miniaturised optical fibre-based laser projector to illuminate the tissue with a pattern of light, which is then imaged with a standard colour camera. The system is calibrated so that the direction of each ray coming from the projector, with respect to the camera, is mapped out and remains constant. When an object of unknown shape is placed in front of the projector, the light is reflected into the camera and the intersection of the detected rays with the calibration data reveals the 3D location of the projected pattern.

Calculation and processing of the 3D information is made possible by the fact that the pattern itself consists of multiple spectrally unique colours in a non-repeating arrangement, and the use of advanced computer vision techniques for rapid segmentation and identification of each projected feature. Sub-millimetre accuracy is possible using this system, and in vivo trials have demonstrated its useability in the clinic.