I am interested in determining how and where general anaesthetics act to cause reversible loss of consciousness. These remarkable drugs have been used clinically for over 150 years, yet their mechanisms of action in the brain are only just beginning to be understood. I have been particularly interested in determining how, at the molecular level, general anaesthetics exert their effects, and what factors determine the anaesthetic sensitivities of their targets. We are mainly working on ligand-gated ion channels but are also interested in anaesthetic-activated potassium channels.

Most recently I have been investigating the roles that endogenous sleep pathways play in the actions of general anaesthetics and, in particular, the possibility that hypothalamic sleep pathways are causally involved in anaesthetic-induced loss of consciousness.

Our group uses a range of different techniques, including in vitro and in vivo electrophysiology, molecular genetics, chemical synthesis, enzymology and structural analysis using X-ray diffraction. Some current projects:

1) Neuronal pathways of sleep and anaesthesia

The sleeping brain is similar, in many ways, to the brain following anaesthetic-induced loss of consciousness, and we are following the hypothesis that the same neuronal pathways may be involved. In this work we are hoping to identify which neuronal pathways and brain regions are responsible. The figure shows anaesthetic-induced spindles in the EEG just prior to loss of consciousness, which closely resemble the sleep spindles that occur during the early stages of natural sleep. 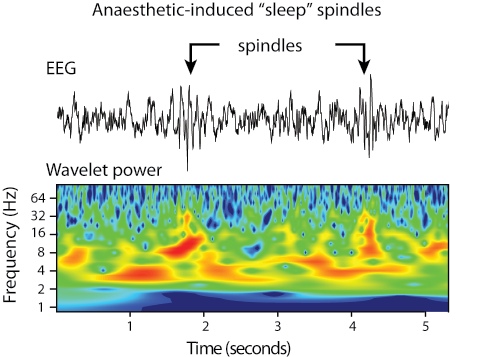 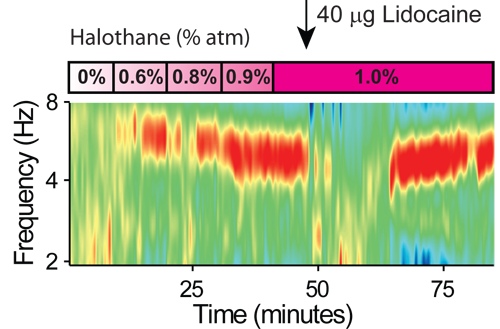 3) Mechanisms of xenon anaesthesia and neuroprotection 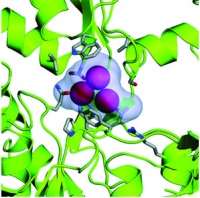 The inert gas xenon is an effective general anaesthetic and may prove to be clinically useful as a neuroprotectant. We have identified both two-pore-domain potassium channels (such as TREK-1) and NMDA receptors as possible molecular targets and we are exploring the molecular and cellular mechanisms that underlie xenon's actions. The figure illustrates xenon atoms within the glycine binding site on the NMDA receptor, the site we believe is responsible, at least in part, for xenon's neuroprotection.

4) The use of photolabels to identify anaesthetic binding sites 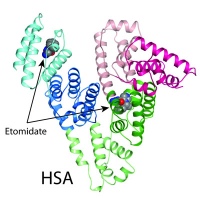 A long-term project in the group has been the synthesis and use of photolabelled general anaesthetics. The aim here is to synthesise analogues of general anaesthetics that maintain their normal pharmacology, but carry photoactivatable groups which react irreversibly to the molecular targets following irradiation. The figure shows the positions of two binding sites for etomidate on the plasma protein human serum albumin, which were identified using the analogue, acyl azide etomidate.