Nick Hopkinson is a Professor of Respiratory Medicine at Imperial College as well as an Honorary Consultant Chest Physician at The Royal Brompton Hospital. He qualified in Medicine at Cambridge and The London Hospital Medical College and went on to train in Respiratory and General Internal Medicine at St George’s and St Thomas’ Hospitals. He is clinical lead for chronic obstructive pulmonary disease (COPD) at The Royal Brompton Hospital where he runs the Advanced COPD clinic where patients are assessed for novel treatments for their disease including endobronchial emphysema therapies. He has established a smoking cessation clinic within the trust and is responsible for developing pulmonary rehabilitation services.

Key areas of activity are the effective management and prevention of COPD focussing on novel lung volume reduction techniques, physiological assessment of skeletal muscle, physical activity and lung function, together with the promotion of high value treatment strategies and tobacco control.

These approaches offer a chance to improve symptoms dramatically in what is otherwise a progressive disease. Starting with the first case series describing bronchoscopic lung volume reduction with endobronchial valves he showed it to be one of the very few interventions which improves survival in COPD that it reduces dynamic hyperinflation during exercise and improves chest wall synchrony and oxygen kinetics. He led the MRC funded BeLieVeR-HIFi study, the first double blind randomised controlled trial of endobronchial valves. He has also shown modern lung volume reduction surgery to have much lower morbidity and mortality than historical papers suggest. Current activity includes leading the CELEB trial, a multicentre NIHR funded study comparing valve placement and surgery directly. The UKLVR study is a BLF funded project to develop a national Lung Volume Reduction Register establishing a collaborative network.

This has included demonstrating that skeletal muscle weakness occurs even in early COPD associated with reduced physical activity levels, investigating the effect of ACE-I and oral nitrate supplementation on skeletal muscle in COPD.

He is Chair of Action on Smoking and Health (ASH) and serves on the Royal College of Physicians Tobacco Advisory Committee.

Work to prevent uptake of smoking and help smokers to quit is fundamental to addressing the burden of COPD. Highlighting rates of child uptake of smoking contributed to the adoption of measures on standardised packaging for tobacco products and the ban on smoking in cars with children.  Collaborations include the FRESHAIR project promoting lung health in low and middle income countries and work on the global environmental impact of tobacco production and consumption.

This is linked to the pyramid of value concept - emphasising the evidence base and low cost per QALY of interventions in COPD including flu vaccination and pulmonary rehabilitation. 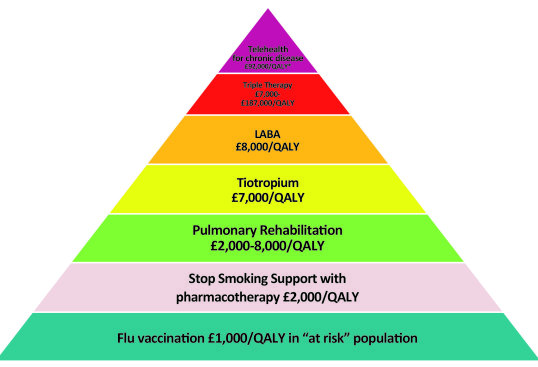 With the London Respiratory Network he developed the Breathing SPACE approach for reviewing the care of any chronically breathless patient. He is a Fellow of The Royal College of Physicians, an Invited Specialist of the International Primary Care Respiratory Group and has served on the Council of The British Thoracic Society and chaired the BTS COPD Specialist Advisory Group.

He is online editor of the journal Thorax and blogs regularly for the British Medical Journal and elsewhere.

He serves on the NICE COPD guidelines committee.

He is Medical Director of the British Lung Foundation and appears regularly in print and broadcast media (including Newsnight, Today and Radio 4’s Inside Health).