Dr Kirkby's current work centres around the role of cyclo-oxygenase and related enzyme pathways in cardiovascular disease, cancer, inflammation and immunology and is supported by close collaboration with colleages at NHLI and international leaders in the field.

COX-1 in the vasculature 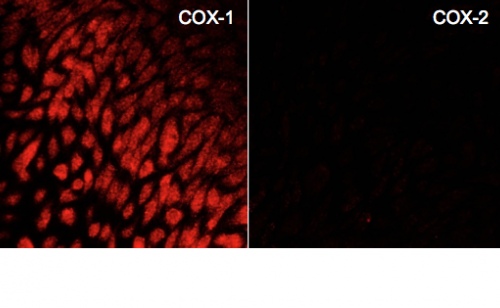 COX-1 is ubiquitously expressed throughout the vasculature and in platelets. It is clear that COX-1 in platelets drives thrombosis, and inhibition of this explains the cardioprotective effects of aspirin. The role of COX-1 in the vasculature, however, remains less clear with some in vitro evidence suggesting that vascular COX-1 may have both harmful and protective roles in the cardiovascular system. Now, we are using unique genetic models of vascular COX-1-deficiency to explore the relative importance of these effects in vivo. The aim of this work is not only to clarify the role of vascular COX-1 in cardiovascular health and disease but also to test the idea that targeting COX-1 in blood vessels as well as platelets could improve the therapeutic effects of aspirin. This work is performed in collaboration with Prof Harvey Herschman at UCLA and is supported by a BHF Intermediate Research Fellowship.

Cardiovascular side effects of NSAIDs 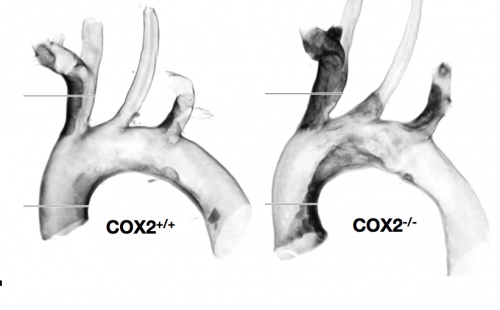 Non-steroidal anti-inflammatory drugs (NSAIDs), which work by inhibition of COX-2, are amongst the most widely used drugs worldwide. However, their use is associated with rare but serious cardiovascular side effects including heart attacks and strokes. This has prevented development of new NSAID-like drugs, including for cancer prevention, where NSAIDs have proven benefits. We are taking an unbiased systems biology approach to this question, to identify new COX-2 regulated mechanisms that can explain cardiovascular toxicity of NSAIDs and biomarkers that can predict those individuals sensitive to these effects. Using this approach we have recently identified one candidate molecule as ADMA, an endogenous inhibitor of the cardioprotective NO pathway, which is elevated in people taking NSAIDs and which could explain their cardiovascular toxicity and/or predict those at risk. Most recently, we have created novel lines of renal and vascular specific COX-2 knockout mice to determine the relative roles of these tissues in COX-2 cardiovascular protection. This work is performed in collaboration with Prof Jane Mitchell at Imperial College and is supported by a BHF programme grant.

Rgl1 as a novel inflammatory pathway

Another lead we have identified from global gene expression profiling of COX-2 knockout tissue is Rgl1. Rgl1 is a component of the Ras pathway which is activated by Ras and activates Ral, leading to various biological effects. This pathway is most commonly implicated in cancer development, but we have found it also it is induced during inflammation and has important roles in modulating downstream inflammatory responses and functions in vascular and immune cells. We are now studying these questions using a unique Rgl1-deficient mouse model in the context of vascular inflammatory diseases including atherosclerosis and sepsis. This work is support by a BHF PhD studentship for Ms Mascha Vinokurova. 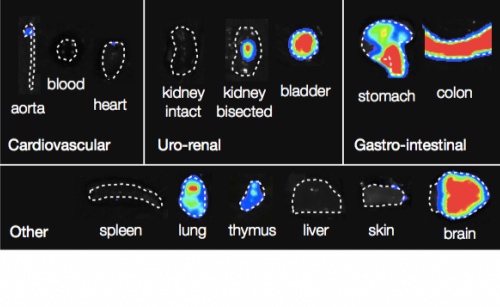 COX-2, the target of NSAID drugs, is typically though of as an inducible enzyme,  not present in healthy tissues but is specifically unregulated during inflammation and cell growth. However, it is becoming increasingly clear that COX-2 can also be expressed constitutively, and that is constitutive rather than induced COX-2 that explains cardiovascular and gastrointestinal side effects of NSAIDs. We have performed systematic mapping of constitutive COX-2 expression and are currently exploring the mechanisms that drive COX-2 expression in healthy tissues with the idea that targeting COX-2 at the transcriptional level could dissociate therapeutic and side effects of COX-2 inhibition. In addition, we are exploring how different types of inflammatory stimuli modulate COX-2 expression and the implications this has for specific immunological functions. 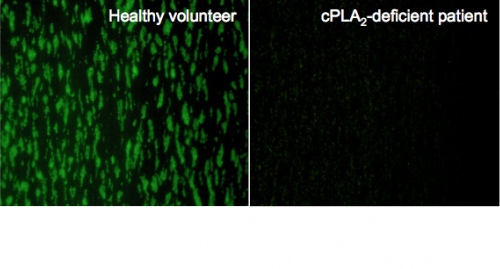 Eicosanoids are crucial signaling molecules generated by platelets and the vasculature that control platelet activation. While many of these, such as thromboxane and prostacyclin, are well understood many questions remain over how they interact with anti-platelet drugs, with other cell types and with the hundreds of related lipid mediators produced in parallel.  Using traditional pharmacological approaches and samples from a unique cPLA2-deficient patient whose platelets cannot synthesise eicosanoids, we are currently studying how the full range of platelet eicosanoids act together to regulate platelet function, and how vascular eicosanoids interact with anti-platelet drugs to control platelet reactivity. This work is performed in collaboration with Prof Tim Warner, Queen Mary University.