Dr Nobuaki Kudo is a molecular cell biologist who received PhD from the University of Tokyo in 1999 for his work on an antibiotic leptomycin B and its cellular target protein CRM1. He discovered that leptomycin B covalently binds to CRM1 and inhibits an activity of CRM1 as a protein nuclear export receptor.

He moved to the Research Institute of Molecular Pathology in Vienna Biocenter, Austria as a postdoctral fellow and studied mechanisms of meiotic chromosome segregation in mammalian spermatocytes and oocytes.

Dr Kudo joined Imperial College in 2007 as the Head of Chromosome Cohesion Group in the Department of Surgery and Cancer. One of the aims of the group is to understand mechanisms for generating health eggs by the maintenance of chromosome cohesion and cell cycle arrest during prolonged oogenesis. The group is also interested in relationships between meiotic chromosome functions and higher order chromosome structure mediated by a protein complex called cohesin.

Recently we have establihsed fluorescense live cell imaging systems on mouse oocytes. With this technique we visualise chromosomes and spindle microtubules with fluorescence-tagged proteins and analyse time-laspe images. This innovative methodology allows us to study molecular mechanisms of bipolar spindle formation and chromosome segregation in oocytes that is the major origin of an extra chromosome in trisomy such as Down syndrome. 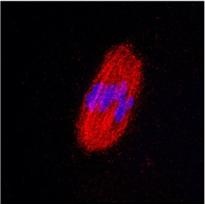 Picture: A fluorescence laser confocal micrograph of mouse oocyte spindle (red) and chromosomes (blue) at metaphase I. Dynamic motions of microtubules and chromosomes are studied under a newly established live cell imaging system in our group.