-      Defining the AMR Burden of Antimicrobial Manufacturing Waste in Puducherry and Chennai: Antimicrobial resistance (AMR) is an important concern for public health authorities at global level. While for a long time global focus was on the use and misuse of antibiotics in the human and animal health sectors as the cause of many pathogenic bacteria becoming resistant to a variety of antibiotics, in recent years the role of waste from pharmaceutical production facilities has been recognised as a significant driver of AMR. With around 80 to 90% of the world’s antibiotics produced in factories in India and China, the project investigates the link between levels of antimicrobials in manufacturing discharges and the proliferation of AMR in receiving environments, studying two regions in India as case studies: Puducherry and Chennai.It is a collaborative project between Imperial College and four research organisations from India including Pondicherry University and the Indian Institute of Technology.

- A Novel Framework for Predicting Emerging Chemical Stressor Impacts in Complex Ecosystems: Freshwater ecosystems are under an increasing array of threats, both in the UK and worldwide, especially from a wide range of new and emerging chemical stressors (e.g. novel antibiotics and pesticides). Freshwater biosciences and applied ecology are under-equipped for dealing with these new threats: the evidence base is lacking, there is often little or no mechanistic understanding, or predictive capacity for anticipating how these novel chemicals will operate in the real world. This project will address all these shortcomings by taken a radically different approach from the classical biomonitoring and ecotoxicology tools that have dominated for many decades. This will involve the development of indicators of both proximate pollution, as the chemical first enters the biological system (commonly as a new food source for microbes), and also of its indirect effects as its impact propagates through the food web. This will provide a completely new paradigm in chemical stressor monitoring, based on using first principles to derive a novel means of predicting "ecological surprises" that commonly arise due to the inadequacies of our current simplistic approaches when dealing with the true biocomplexity of natural systems. Our scope is for our approach to serve as a diagnostic tool for management, with research findings, for example, supporting the selection of mitigation options that deliver reduction of ecological effects. This paradigm shift will allow far more robust predictions and therefore more informed management decisions about the freshwaters of the future.

-       EU Globaqua: PI for the UK contribution (Imperial) to this €10 million multidisciplinary 5 year research programme on the effects of multiple stressors on aquatic ecosystems under water scarcity funded by the European Commission’s Seventh Framework Programme. The ultimate goal of GLOBAQUA is to explore how to adapt management and policies to minimise the ecological, economical and societal consequences of water scarcity and ongoing global change. Scientific results from the project will be integrated with the demands of policymakers and national/EU environmental agencies to fill the communication gap in the Science–Policy Interface. Central to this,  is Work-Package 12 (Policy) led by Dr Voulvoulis, who is also in charge of the the Anglian region case study. The Broadland Rivers catchment in East Anglia forms one of the six selected basins affected by water scarcity (due to either climatic or societal factors) studied under the GLOBAQUA project.

-       Multimodal characterisation of nanomaterials in the environment: A NERC funded project in collaboration with the Department of Materials (Imperial College) and Bristol University, improving our understanding of the bioavailability, lifetime and expected evolution of ENMs, and how they partition between media along their intended life cycle.

-       Anglian Water Research Programme: Prof Steve Kaye (Head of Innovation, Anglian Water) and Dr Nick Voulvoulis, with the support of Professor Nigel Graham, have been coordinating this for over a decade.  Projects have ranged from investigating emerging contaminants and assessing potential risks to helping Anglian Water understand expected impacts of climate change and how to best adapt to these. Through time Anglian has sponsored a research fellowship, supported many PhD students, MSc projects and our two year placement programme as well as of course helped Imperial educate our future leaders in the field by supporting our postgraduate teaching curriculum.

-       Veolia Resources Management Research Programme: PI for this successful continuing research programme investigating opportunities for waste minimisation, recycling and reuse, as well as the possibility of creating not necessarily less but better waste. Alongside this, current policy is examined in order to highlight how it can be adapted to better serve environmental, social and commercial needs.

More recent work has expanded these themes and has centred on developing the concepts and conflicting demands of the water-energy-food nexus, where each is inextricably bound to the others, providing escalating environmental, social and financial challenges such that only a major shift of mindset and an investment in interdisciplinary modes of action will have any chance to resolve the problems. In this context, and linking back to earlier research, is the investigation of the benefits of “closing the loop” with direct reuse of treated wastewater effluent either directly (groundwater recharge/drinking water input) or via agriculture (irrigation) or energy generation (cooling water). A further development from this is a fuller exploration of chemicals in the hydrological cycle so that not only water but also chemicals such as phosphorous, heavy metals or precious metals may be recovered from wastewater treatment and sludge processes, “closing the loop” in a different way and turning waste from a burden into a resource.

Research on environmental quality focuses on the integrated scientific study of contaminants in the aquatic environment, soils, sediments and air, and implications for risk assessment, management and policy. These areas of research are complemented by the development of skills in environmental modelling, sustainability analysis, life cycle assessment and economic evaluation. 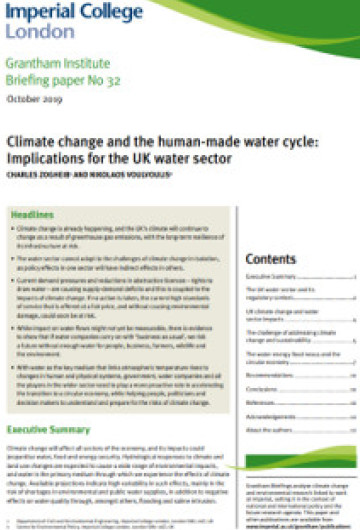 The OPAL National Soil Centre is one of five national centres of expertise under the OPAL  project. The centre is based at the Centre for Environmental Policy, Imperial College London under the direction of Dr Voulvoulis.. The OPAL Soil and Earthworm Survey, is open to everyone. The survey aims to build a picture of soil quality and earthworm populations all over England.

Dr Voulvoulis is the Associate Editor for Environmental Management, an international peer reviewed journal published by Springer that covers the use and conservation of natural resources, the protection of habitats and the control of hazards. He is also on the Editorial Board for AIMS Environmental Science and for Environmental Nanotechnology, Management  and Science. He was recently the editor of the special issue of AIMS ENVIRONMENTAL SCIENCE: Pollution and Chemicals in the Environment.

Other major appointments or significant activities