Malaria is one of the major infectious diseases of man, causing annually 350–500 million cases and at least 1 million deaths. Malaria is caused by blood parasites of the genus Plasmodium that have complex life cycles, alternating between human and mosquito hosts. We investigate molecular mechanisms that regulate parasite-host interaction, parasite life cycle progression and mosquito transmission. We also develop rational strategies to identify key molecules of life cycle regulation that should be targeted by novel drugs and vaccines to treat and control the spread of malaria. We mostly work with Plasmodium berghei, a malaria parasite of rodents that does not infect humans and is particularly accessible to genetic manipulation.

The regulation of gamete formation

In malaria parasites obligatory sexual reproduction occurs as the paraiste is transmitted to the mosquito. Male and females precursor stages, called gametocytes, are taken up into the blood meal of the feeding mosquito, where within a few minutes they transform into gametes. In a dramatic event called exflagellation male gametocytes produce and release 8 flagellated male gametes, which move quickly through the blood meal in search of a female.Gametes form in response to cues from the midgut environment, which include a drop in temperature, a small mosquito molecule (xanthurenic acid) and possibly a slight rise in pH.We are using the rapid and highly synchronised response of P. berghei gametocytes to xanthurenic acid to learn more about signal transduction and life cycle regulation in Plasmodium . Some of our recent progress is summarised in Fig. 1. 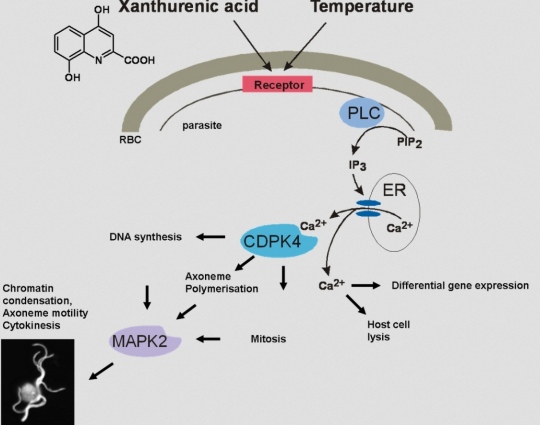 The genomes of different Plasmodium species encode around 65-85 typical eukaryotic protein kinases. In addition to CDPK4 and MAP2, other protein kinases have key functions in parasite development in the mosquito, including Nek-4, a member of the NIMA (never-in-mitosis-Aspergillus) family, which is required for cell cycle progression in the zygote, and CDPK3, another member of the calcium-dependent protein kinases, which is important for productive gliding motility in the ookinete.The analysis of knock-out mutants lacking these and other signalling molecules is beginning to shed light on mechanisms of cellular regulation in Plasmodium. Importantly, they also demonstrate that many signalling pathways have important stage-specific, non-reduncant functions, that should be exploited for drug development. Identifying the right group of target molecules will be a major challenge.