Professor Hess's research interests and his group's activities are in theoretical condensed matter quantum photonics and are currently focused on active (photonic, electronic and magnetic) metamaterials, quantum nano-photonics and spatio-temporal dynamics of (plasmonic and semiconductor) nanolasers.

Together with his  group he has made pioneering contributions to the theory of slow light in metamaterials (the ‘Trapped Rainbow’, Nature, 15 Nov 2007 and several subsequent publications in Nature), to (ultrafast) spatio-temporal dynamics and quantum fluctuations of semiconductor, quantum dot and fibre lasers as well as to the quantum theory of temperature on the nano-scale.

Professor Hess's research brings together theoretical condensed matter physics with theoretical quantum optics and embraces a broad range of theoretical approaches and computatioal techniques. In his group, a large variety of advanced computational methods and simulation tools are developed and used on parallel high-performance computing platforms at the College. On the basis of 'computational experiments' the Hess group strives to explore the rich physics of metamaterials, complex nano- and soft photonic systems and novel lasers to harness the quantum nature of electrons and photons on the nano-scale and ultrafast timescales.

The video of the invited talk Active Nanoplasmonic Metamaterials presented at the HKUST Institute for Advanced Study "New Materials and New Concepts for Controlling Light and Waves" at the Hong Kong University of Science and Technology in Hong Kong (6 October 2012) provides a brief overview of the recent research on metamaterials and nanoplasmonics with quantum gain.

Coherent Amplification and Noise in Nanoplasmonics and Metamaterials

Using a realistic example of a gain-enhanced nanofishnet metamaterial exhibiting a negative refractive index, we demonstrate the transition from loss-compensation to amplification and to nanolasing.

'Negative Absorption' in a Negative-Refractive-Index Metamaterial

Negative refractive index metamaterials offer the possibility of revolutionary applications, such as subwavelength focusing, invisibility cloaking and 'trapped rainbow' stopping of light. At optical frequencies, these innovative materials suffer from high dissipative losses due to the metallic nature of their constituent metamolecules.

Can this obstacle be overcome?

The findings are a guide towards lossless and amplifying metamaterials with exciting photonic applications. 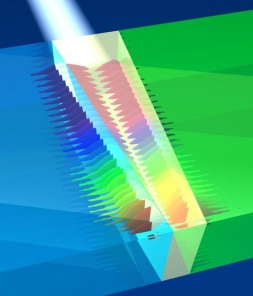 Here we demonstrate theoretically that an axially varying heterostructure with a metamaterial core of negative refractive index can be used to efficiently and coherently bring light to a complete standstill. In contrast to previous approaches for decelerating and storing light, the present scheme simultaneously allows for high in-coupling efficiencies and broadband, room-temperature operation. Surprisingly, our analysis reveals a critical point at which the effective thickness of the waveguide is reduced to zero, preventing the light wave from propagating further. At this point, the light ray is permanently trapped, its trajectory forming a double light-cone that we call an 'optical clepsydra'. Each frequency component of the wave packet is stopped at a different guide thickness, leading to the spatial separation of its spectrum and the formation of a 'trapped rainbow'. Our results bridge the gap between two important contemporary realms of scienceÃ¢ÂÂmetamaterials and slow light. Combined investigations may lead to applications in optical data processing and storage or the realization of quantum optical memories.

Metal surfaces and interfaces can support surface plasmons - density waves of free electrons. These plasmon waves can interact with photons, opening the way to a novel realm of optics - plasmo nics. When the metal surfaces are nanostructured, the possibility for true nanoscale photonics emerges at optical wavelengths. Using theoretical and advanced computational appro aches that take on board microscopic s patio-temporal properties the group studies the light-matter interaction in nanostructured metals and (molecular/nanoparticle) light scattering in structured polymer films and explores the ultrafast (sub-) femtosecond dynamics. 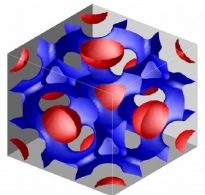 Spontaneous emission of photons is one of the fundamental properties of matter. Recently it has been demonstrated that 'photonic crystals' can change the way a photon is emitted by tailoring of its environment. We model the materials properties of ordered and disordered photonic "crystals" and arrays and networks of plasmonic nano-antennas to explore the possiblity of strong control of spontaneous emission.

Slowing down light may dramatically increase the interation of photons with matter and lead to unprecedented nonlinearities, dramatically improved sensing or better efficiency of solar cells. The group studies the physics of slow lightwaves in semiconductor quantum dot nanomaterials, metamaterial heterostructures, plasmonic nanomaterials, photonic crystals and fibres and graphene. 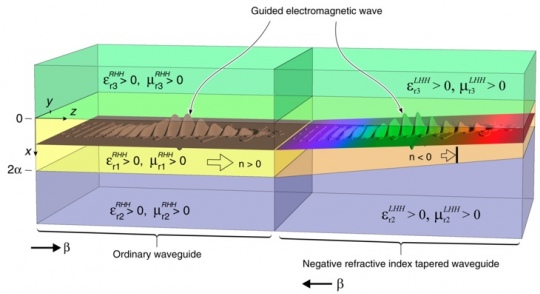 femto- and attosecond dynamics of materials

The conception and realisation of pulses of light that are as short as femto- or atto seconds has started to open up exciting new possibilities to observe and control the dynamic s of electrons in atoms, nano-structures, biological media and the solid-state. We study the physics of ultrafast femto- and attosecond dynamics of semiconductors, plasmonic nanomaterials and bio-molecular media by a combination of theoretical and advanced computational simulation schemes involving and taking into account the propagation of coherent electromagnetic waves (with wavelengths from the THz to the soft X-ray regimes) and matter (on various levels of sophistication).

The group has pioneered the field of spatio-temporal dynamics and quantum fluctuations of semiconductor lasers and continues to study the physics of advanced lasers, focussing on mirocavity or nano-lasers, new active materials and nonlinear dynamics and exploring novel concepts such as the "thermal laser". We develop new theoretial approchaes for innovative gain materials (such as quantum dots), quantum fluctuations or novel laser concepts (such as the "thermal laser") and laser cavities (such as photonic crystal fibres) that may emit coherent radiation at new wavelengths and optical pulses with durations as short as femto- or attoseconds.

The physics of noncrystalised ("soft") materials as well as the realization of novel photonic "crystals" such as polymer opals involve complex spatio-temporal processes all the way from macroscopic scales down to the "flow" of single molecules (such as water) through carbon nanotubes.

The group develops new effective theoretical models (such as a nonlinear Maxwell model) describing the highly nonlinear flow and structural dynamics of anisotropic fluids (such as polymers) and simulates the microscopic (nonequilibrium) molecular dynamics of nano-confined water and formation of polymer opal films from (core-shell) polymer spheres on the basis ofequilibrium and nonequilibrium molecular dynamics computer simulation.