My research concerns electrical energy conversion, with a focus to the provision of power in hard to reach places, such as portable devices (where recharging batteries through charging cables is either inconvenient or impossible), medical implants and wireless sensors.  The technologies involved in this work include energy harvesting systems, battery diagnosis, wireless power transfer and power electronics.

During my PhD, and in the early part of my reseach career as a member of academic staff, my work concentrated on energy harvesting devices for producing self-powered systems powered by ambient vibration.  These systems, which are comparable to MEMS implementations of generators in self-winding watches, are generally used in conjunction with miniature batteries to extend the useable deployment lifetime of wireless sensor networks, which have use in monitoring machinery, structures and transport applications.

More recently, I have begun a research program in wireless power delivery, including harvesting RF enbergy from the ambient (see http://www.londonrfsurvey.org) and delivery of power using the magnetic near field using resonant inductive coupling.  A prototype wireless power transfer system is shown below. 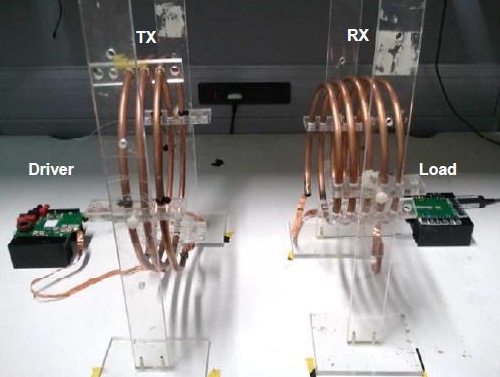 In all of these areas, a critical enabler is the electronics which allows energy to be efficiently processed, and converted into forms which suit the application to both maximise power density and power devices.  Power electronics, therefore, forms a key part of my research.