Research interests in the Davies group are primarily focussed upon main-group organometallic and coordination chemistry, but also encapsulate a range of inorganic, organic and organometallic topics. Applications lie in the areas of novel reagents for greener and more selective organic transformations, catalysis, functionalised materials, gas storage and separation (including hydrogen gas fuels tanks and carbon dioxide capture), and bio-fuel additives.

The Davies group is interested in the application and development of novel stoichiometric and catalytic copper based reagents, with a key focus on building an underlying understanding of the structures, behaviour and mechanism of operation of these reagents. To achieve this we use combined synthetic, spectroscopic and kinetic studies with particular emphasis on the coordination chemistry of the copper in its resting, active and transition states.

Copper salts and complexes have shown themselves to be versatile catalysts for cross coupling and condensation reactions with breadth of scope similar to that of palladium, although significantly less expensive (approximately 105 cheaper) and employing more readily available and cheaper ligands (usually trivial nitrogen or oxygen based ligands). However, the use of copper in coupling protocols has mainly been limited to small-scale studies in research labs. Perhaps the biggest drawback of copper assisted cross-coupling chemistry is the complete lack of understanding of the mechanism of these reactions and in particular the effect of ligands. To date, most copper catalytic systems have been developed empirically, i.e. via experimental trial and error, rather than by any rational approach based on a fundamental understanding in the area. We are focussed upon building a more thorough mechanistic appreciation which we then apply to the development of copper catalysts for new coupling applications and for the refinement of existing ones.

Within the Davies group we have extensive experience in the study of the structures and mechanisms of operation of organocopper reagents, including the synthesis and handling of these often highly air, moisture and temperature sensitive species. Notable recent breakthroughs in this area include the first definitive structural characterisation of a Grignard derived organocuprate [Ph4Cu2(MgI.OEt2)2] (shown below), the first report of Schlenk-type equilibrium for lithium amidocuprates using 2D inverse detected NMR methods, and a new route to polyferrocenylene based on the oxidative coupling of lithium ferrocenylenecuprates. 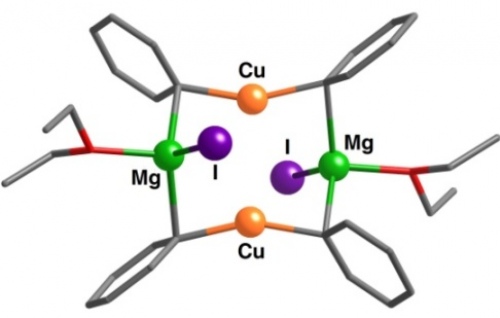 An active area of research in the group is the development of new Metal-Organo Framework (MOF) materials. These are microporous 3D-coordination polymers consisting of metal based nodes and organic linking units. These materials are of high interest due to their applications in gas storage technologies (including hydrogen gas for automobile fuel tanks and carbon dioxide for carbon sequestration from the exhaust flues of coal power plants), gas separations and heterogeneous catalysis. Particular expertise lies in the preparation of novel MOF materials containing “light” s-block metal centres such as magnesium, and the application of highly branched and robust silicon-based linking units for MOF construction.

The diagram below shows a novel highly porous MOF of flu topology recently developed within the group. Left: View of a section of MOF. Right: Diagrammatic picture of one of the cavities (up to 2.1 nm in diameter) within the MOF. 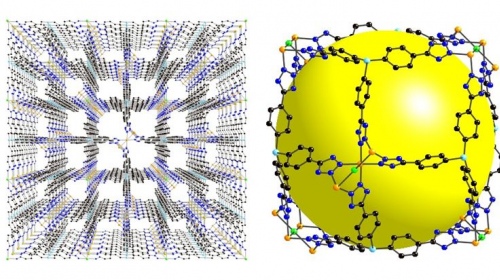 Research in this area is focussed upon the synthesis and coordination chemistry of novel anionic phosphorus-chalcogen ligands (where the chalcogen is sulfur, selenium and/or tellurium). Recently we have reported upon the oxidation / insertion reactions of elemental chalcogens with lithium phosphides to give a number of chalcogeno-phosphorus ligand systems including chalcogeno-phosphinites (1), dichalcogeno-phosphinates (2), dichalcogeno-hypodiphosphinates (3) and trichalcogeno-phosphonates (4). Selected metal complexes of these ligands have been studied for their potential application as single-source precursors towards metal chalcogenolide thin films and nanoclusters. In addition a range of unique Cu(I) cluster compounds have been prepared with potential roles in biomimetic and supramolecular chemistry. We are particularly interested in the application of trithio- and triseleno-phosphonates (4) as heavier chalcogen analogues of metal organophosphonates (RPO32-): well known materials with potential and realised applications in many fields including catalysis, guest intercalation, sorbents, ion exchange, proton conduction, non-linear optics, photochemically active materials and sensors.