We are investigating the molecular mechanism(s) by which the inert gas xenon protects brain cells following brain injury.  Overactivation of NMDA subtype of glutamate receptor is involved in pathological conditions such as ischemia, stroke and traumatic brain injury. Our discovery that xenon inhibits NMDA receptors led to the idea that xenon could be used as a neuroprotectant. Xenon is neuroprotective in models of stroke & ischemic injury and is currently in the early stages of clinical trials for use in neonatal asphyxia and cardiopulmonary bypass. We recently showed that xenon neuroprotection against ischemic injury is mediated by inhibition at the NMDA receptor glycine site. 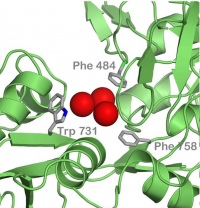 Using a combination of molecular modelling and electrophysiology, we showed that xenon (and the volatile anaesthetic isoflurane) act at the glycine-binding site of the NMDA receptor. The figure on the left shows xenon atoms (red spheres) binding in the glycine site of the NR1 subunit of the NMDA receptor. This mode of inhibition of the NMDA receptor may explain why xenon is an effective neuroprotectant, apparently devoid deleterious clinical side-effects common with other NMDA receptor antagonists. We have shown that particular aromatic amino-acids are important for the binding of xenon at the glycine site and that mutation of these amino acids selectively prevents the binding of xenon. These mutations will allow molecular genetics techniques to be used to dissect out the molecular targets underlying xenon's neuroprotective and anaesthetic properties.

Traumatic brain injury (TBI) is a major cause of morbidity and mortality throughout the world. In developed countries TBI is the main cause of death and disability in those under 45. Road traffic accidents and falls are leading causes of TBI. In spite of its widespread occurrence there are no effective treatments specifically aimed at preventing brain-cell loss following head injury. The high economic and social costs of dealing with head injury combined with its high incidence mean that there is an increasing need to develop new treatments for TBI. TBI is characterized by a “primary injury” due to the initial mechanical force, followed by a “secondary injury”, developing hours to days (or longer) following the initial trauma, that potentiates neuronal dysfunction and loss caused by the initial injury. Prevention of secondary injury is the key to mitigation of the costly neurological and cognitive impairments that follow TBI.

Using an in vitro model of traumatic brain injury we have shown that xenon is remarkeably effective at preventing the spread of secondary injury after trauma.

As the next stage in the translational process towards using xenon clinically in TBI patients we are investigating whether xenon is protective against traumatic brain injury in in vivo models of brain trauma. 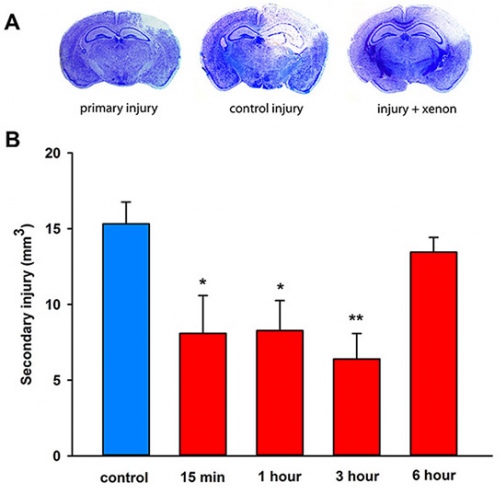 The above figure is adapted from Campos-Pires et al 2015, the first study to demonstrate the efficacy of xenon in an animal model of TBI.  We found that xenon  limits secondary-injury develpment, is effective at concentrations as low as 30% and even when the treatment start time is delayed up to 3 hours after trauma. Xenon-treatment prevents clinically relevant long-term motor deficits up to 1 month after injury.  These findings support the idea that xenon could be a first-line treatment for patients with traumatic brian injury. This work was supported  with an award from the European Society of Anaesthesiology in June 2013.

The increasing use of Improvised Explosive Devices (IEDs) in both military and civilian contexts has led to an increase in the numbers of people experiencing traumatic brain injury as a result of exposure to explosive blast-waves.  It is now recognised that blast-traumatic brain injury has a unique pathophysiology, distinct to other types of TBI such as  blunt closed head trauma.  We have developed novel models of blast traumatic brain injury in collaboration with the Royal British Legion Centre for Blast Injury Studies & the Dept of Bioengineering.  These models allow us to understand the underlying pathophysiology of blast TBI and to evaluate the efficacy of novel treatments for blast-TBI.

One of the mysteries of research on traumatic brain injury is that the mechanism by which secondary injury spreads following trauma is not fully understood. In parallel with our studies on neuroprotection, we are also using a variety of state of the art  techniques to investigate the mechanism by which secondary injury develops. This may allow the identification of novel biomarkers that can be used to identify and stratify TBI patients.

The mechanism of injury development following trauma may have common features with other neurodegenerative conditions. Understanding what happens after trauma and how to limit secondary injury may have relevance to conditions such as Alzheimers', other forms of dementia and Parkinson's disease.

BRAIN INJURY DUE TO EXPOSURE TO CARBON MONOXIDE

There are approximately 4000 identified cases of accidental carbon monoxide (CO) poisoning in the UK each year requiring medical treatment, according to Department of Health statistics. Each year 200 patients are admitted to hospital with serious brain injuries and around 40 people die, as a result of accidental exposure to carbon monoxide. It is estimated that carbon monoxide poisoning costs the UK up to £ 178 M each year. Those who survive an episode of CO poisoning frequently suffer from permanent neurological impairment. Neurological symptoms include impairments in: memory and cognition, co-ordination, gait, fine motor function. Depression and anxiety are also frequently reported. The mechanisms underlying the brain damage caused by exposure to carbon monoxide are not fully understood, but are thought to involve mechanisms distinct from hypoxic injury. In addition to identified cases of CO poisoning, there may be a large number of people exposed to sub-acute CO levels that go undiagnosed and undetected.  With the generous support of the Gas Safety Trust we are investigating the mechanisms by which exposure to carbon monoxide leads to neurological impairment.

Neuroprotection Against Traumatic Brain Injury by Xenon, but Not Argon, is Mediated by Inhibition at the N-Methyl-D-Aspartate Receptor Glycine Site, IBIA Meeting 2016 World Forum Centre, The Hague, Holland, 2016