Dr. Robert Endres leads the biological physics group with its strength in the quantitative understanding of sensing and signalling, and the physics of life network. He also designed and introduced the Masters programme in systems and synthetic biology, and is highly involved in training undergraduate students in systems biology.

Check out my open positions (PhD and postdoc)

Imperial College Network of Excellence in 'Physics of Life' (link)

My inaugural lecture originally planned for 5th June 2020 is moved to 2nd June 2021 - if travelling and social-distancing measures allow it.

Accepted paper in PNAS on Growth-rate dependent resource investment in bacterial motile behavior with the Sourjik lab at Marburg, Germany.

In September 2019, I am finally promoted to full Professor!

Accepted in Nature Cell Biology: Persistent and polarized global actin flow is essential for directionality during cell migration, together with the Brian Stramer Lab and former postdoc Linus Schumacher.

Maksym Romenskyy was awarded a Marie Curie fellowship to work on social behaviour of C. elegans nematodes, in particular on how genes map to behaviour (2/2019). In collaboration with Andre Brown at Hammersmith campus.

Awarded Imperial 'Physics of Life' network of excellence which I will co-lead with Chris Dunsby from physics and Chiu Fan Lee from bioengineering (1/2019).

In press in Rep. Prog. Phys.: "How cells engulf: a review of theoretical approaches to phagocytosis" with D.M. Richards (Exeter). 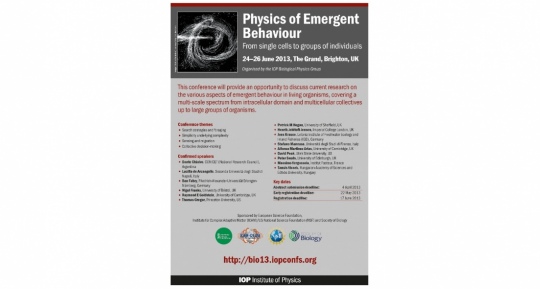 Before starting at Imperial College in 2007 as Senior Lecturer, Robert was a postdoc with Prof. Ned Wingreen in the Molecular Biology Department at Princeton University, where his main research accomplishments were the understanding of the remarkable signalling properties of bacterial chemotaxis and the atomistic prediction of protein-DNA binding sites. In 2002 he obtained a PhD in physics from the University of California at Davis. His work, conducted in the group of Prof. Daniel Cox, dealt with charge transfer in biomolecules, in particular in DNA. In 1999 he obtained a Masters physics from the University of Goettingen in Germany, where he worked in the group of Prof. Kurt Schoenhammer on highly correlated electronic systems. In 1996/1997 he also spent an academic year at the University of California at Santa Cruz.

Figure: Schematic of a bacterial cell illustrating the high degree of organization. As an example, chemotaxis receptors get inserted into the inner membrane and localize at t he cell poles, where receptors f orm signalling complexes leading to remarkable signall ing properties. The underlying biop hysical and cell-regulatory mechanisms for recept or clustering are still largely unknown.