I am a Professor of Experimental Physics in the Quantum Optics and Laser Science (QOLS) research group of the Physics Department of Imperial College London.  I am also currently the Vice-Dean (Education) for the Faculty of Natural Sciences.

My expertise is in Atomic Physics, Spectroscopy and Quantum Optics.  My current research is in the area of Trapped Ions and Laser Cooling (see the web page of the ion trap group).

We are the only research group in the UK working with laser cooled ions in a Penning trap.   We trap individual atomic ions in our Penning trap and investigate how to laser-cool them to ultra-low temperatures where they essentially stop moving.  We can then use them to study the interaction between laser light and individual particles, with applications in spectroscopy, quantum optics and quantum information processing. For a general review of Penning traps, see this article.

We have successfully cooled a single ion in a Penning trap to the ground state of its motion (in one dimension) 99% of the time. We are the only group to have demonstrated this technique in the Penning trap.  We have also measured the motional heating rate in our trap to be one of the lowest of any ion trap in the world, giving a motional coherence time of the order of one second.  This demonstrates the potential of the Penning trap for experiments requiring long coherence times and low heating rates. A link to the publication describing this research is here.  In our more recent work we have extended this technique to the cooling of both modes of motion of two ions in the trap (see this publication).

We are now in a position to demonstrate manipulation of the motional state of the ion, and we have generated coherent states of motion with large amplitude in this way.

The radial motion in a Penning trap is unusual in that it consists of two independent circular motions, one of which has a negative total energy. We have managed to cool both of these motions to their quantum mechanical ground state and this work is described here. 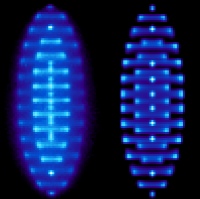 We are also now studying "Ion Coulomb crystals" which are formed when a small number of these ions are present in the trap.  For a review of ion Coulomb crystals, see this article. The figure shows an experimental image of a crystal containing approximately 174 ions, together with a computer simulation of the crystal.  Our research on this topic is described in this publication.


We have recently started constructing a radiofrequency trap for studies of the use of optimal control techniques in ion trap quantum gates.

My teaching is mainly concentrated on Atomic Physics and Optics at Undergraduate and Postgraduate levels. I am currently coordinating and lecturing a second year undergraduate Atomic Physics course. Up to 2019 I coordinated and lectured part of a course in Platforms for Quantum Technology for our Centre for Doctoral Training in Controlled Quantum Dynamics.  My part related to the use of ion traps in quantum information processing.

I was a member of the Natural Sciences panel for the TEF subject pilot in 2018 and in 2019.

I am active in the Institute of Physics as the former Chair of the Accreditation Committee.  I have also been the Treasurer of the Higher Education Group.

I served as a member of the SPS and PS Experiments Committee at CERN, which reviews a large group of experiments using some of the accelerator facilities at CERN.

I was previously the Head of the Quantum Optics and Laser Science (QOLS) Research Group in the Physics Department and also the Director of Undergraduate Studies in the Department.

I have published the following books:

I have profiles on ResearchGate, LinkedIn and ORCID.