Our group uses interdisciplinary and collaborative approaches crossing chemistry, physics, materials science and engineering to understand and exploit molecular properties for device applications.  In particular, we are looking at new ways to store and transmit information, and to harvest or save energy, using molecular semiconductors.  Some examples of current research are described below.

We are developing an organic vapour phase deposition (OVPD) chamber for the growth of high quality molecular thin films. In OVPD, the material is sublimed in a high temperature environment and swept towards a cooled substrate using a stream of inert heated carrier gas in a low vacuum environment. Advantages of OVPD include: low cost, accurate control over stoichiometry, low material waste and access to new film properties.  It also allowed us to create nanowires with excellent charge transport characteristics.  We are also seeking to control molecular film properties using interface interactions, notably using templating.

Molecular magnets are an exciting new class of materials; they have mostly been obtained as powders and synthesised from solution. Building on our discovery of switchable magnetic couplings in molecular films, we are exploring fundamental mechanisms governing magnetic exchange, and developing new approaches to increase the strength of the magnetic couplings .

We are studying how the spin of molecular structures is affected by photoexcitation.  A particular example includes the process of singlet fission, whereby one photon can generate two charge pairs via the creation of triplet pairs.  Using an approach combining novel controlled thin film growth methods coupled with time-resolved electron paramagnetic resonance, we were able to shed new light on the mechanism for fission and on the role of molecular geometry on the efficiency of the process.

We are investigating the potential of organic or organo-metallic molecules as sources of spins which can be used in the context of quantum-based applications.  Thanks to controlled growth methods, we were able to achieve spin relaxation times above the μs range at 80K, which was a record at the time of publication.

Here we plan to use the chemical resemblance of our polyaromatic thin films with biologically relevant molecules such as chlorophyll or amino acids, in order to develop molecular biosensors, based on the change of optoelectronic or magnetic properties of the thin film upon adsorption of the biomolecule. Alternatively, the same principle could be used to functionalise inorganic sensors for selective biomolecule absorption with a high degree of versatility.

Solar Flash - Our new paper in Nature Communications shows that the orientation of pentacene molecules in a thin film influences their ability to undergo fission - very useful for solar cells, or maybe even spintronics!  Read a the news report, or the full story. Congrats to Daphne for a great first paper! 
A report on our outreach activities can be found on the website of Coleridge Primary School.  Many thanks to the Royal Society Partnership scheme for making this happen, as well as to the great resources from Solar Spark!

James passed his PhD thesis on 5/11/14.  Many congratulations Dr Gilchrist! 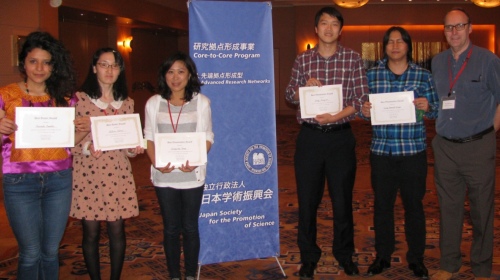 Michele Serri passed his PhD thesis on 11/02/14.  Many congratulations!

Magnetism in molecular thin films is getting hot!

One step closer to quantum computing

Research published in Nature has shown that the spin in copper phthalocyanine can survive in a quantum superposition of states for surprisingly long times.  See the full paper in Nature 503 (2013) 504.