For PhDs or other student projects contact me directly and see my page on opportunities for students to work with Tim Evans.

I have a web site netplexity with more information on my work with complex networks and complexity in general.

I am interested in statistical mechanics, phase transitions and non-equilibrium problems in general. This has led to studies of  Complex networks for which I have some separate Complex Network pages. See my review in Contemporary Physics 45 (2004) 455-474 (or cond-mat/0405123 ). Currently I am very interested in networks constrained by space or time.

With Jari Saramäki from Helsinki University of Technology I have worked on more realistic models for the formation of scale-free networks.  With Doug Plato, I have been looking at exact solutions for network rewiring problems (cond-mat/0612214, physics/0608052, cond-mat/0612214)  which can be recast in a multitude of statistical physics models including the Urn model, Backgammon model, Balls-In-Box model, Voter model and captures aspects of the Minority game. Applications of these models in the literaure are numerous and include cultural transmission (see for example work of Alex Bentley and colleagues). We have now solved our model finding the degree distribution for finite and infnite graphs for arbitrary parameters exactly at all times.

This is part of an interest in sociophysics in general - I recommend Philip Ball's book "Critical Mass" as a non-technical introduction.

Throgh an EU funded collaboration, ISCOM (see below), I have a long standing collaboration with archaeologist Carl Knappett from Toronto University.  Along with Ray Rivers from Imperial, we have several papers outlining our work. As part of this programme I have developed an open source JAVA based programme, ariadne, to implement our ideas. 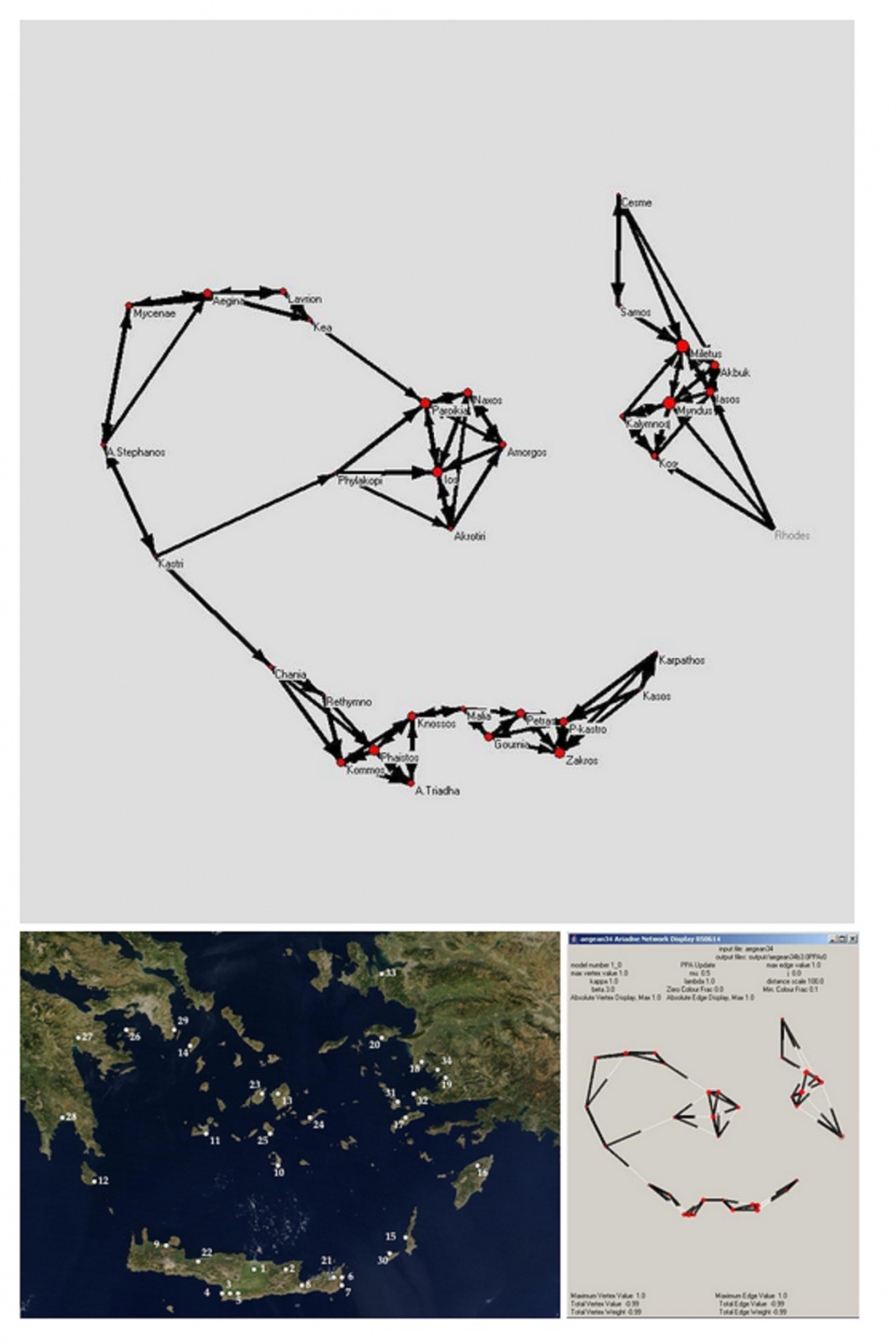 I am the node leader for Imperial in this programme. This EPSRC NetworkPlus grant addresses one of EPSRC's Physics Grand Challenges: Emergence and Physics Far From Equilibrium. The proposal is entitled "Towards consensus on a unifying treatment of emergence and systems far from equilibrium". The aim is to build capacity in this area through workshops and collaborative visits in the UK. Funding from the grant is available first to those named on the grant, but is also open to others from named institutions and from the UK as a whole. A typical use might be to provide some funds to support a workshop, perhaps before or after another relevant event, and to support UK researchers attend such events. The remit is wide, however, so always worth asking. The system is relatively informal. Contact the representative (node leader) from the most relevant institute. A committee of such representatives then decides on the best use of funds. The PI in charge is Bogdan Hnat from Warwick and the funds are administered from there. There are also links to ICAM-I2CAM - Institute for Adaptive Complex Matter.
The grant has a number personnel mentioned coming from a wide variety of UK institutes: University of Warwick, Imperial College, University of Manchester,Oxford University, Cambridge University, Kings College London, University of Bath, University of Aberdeen, Durham University, UCL, University of Southampton, University of Leeds, University of Edinburgh, Royal Holloway, University of Nottingham, Lancaster University.

I was part of  ISCOM, an EU funded 5th framework network on "The Information Society as a Complex System", together with others from Imperial College and colleagues from the University of Modena and various Institutes in Paris. Through this, Ray Rivers  and I started a collaboration with archaeologist Carl Knappett from University of Toronto.

My PhD and earlier research was on Thermal Field Theory. Also known as Finite Temperature Field Theory, this looks at many body problems where the underlying dynamics is described by quantum field theory. I worked on both the formal aspects of the theory and on applications in fields such as particle physics and cosmology.

One part of my interest in the formal aspects is to understand how the different approaches to Thermal Field Theory are related, and how they might be optimal for different problems. For instance I was the first to show exactly what the oldest and best known method, the Matsbara formalism using imaginary time, was calculating for calculations of general dynamical quantities. As part of that work I defined a new sequence of integers, 2, 6, 32, 370, 11292, 1066044, 347326352, 419172756930, which is Sloane sequence A034997. This has been revisited using different techniques.

Thermal field theory requires non-perturbative methods for most calculations, even when the underlying microscopic theory is weakly coupled which normally give reliable results when using simple pertubration theory. Thus I have also developed an interest in non-perturbative methods such as large N, lattice Monte Carlo methods and in particular, variational methods such as the linear delta-expansion.

I have also studied multiplicative anomalies (see hep-th/0104128) which has shown that there are serious drawbacks in the use of zeta-function regularisation, a popular method used in difficult problems quantum field theory such as the Casimir effect and when working with quantum field theory in strange space-times.

Any work that is appropriate is on arXiv so search for T.S.Evans. Similarly search for "T.S.Evans" (including the quotes) on Google scholar.  My family name is very common so  while I always give my name in this form, sometimes it appears in other forms such as T.Evans and Tim Evans. There are even instances where citations to my papers have been wrongly assigned to other researchers with the same surname. For more details see my informal web pages which also have copies of some additional items, some of which are not going to be found in the more conventional places e.g. copies of some talks, some archaeological modelling papers.

At present I am also preparing a text book on Group Theory with Dimitri Vvedensky which is due to be published soon by Imperial College Press (preliminary table of contents).

Netplexity - The Complexity of Interactions in the Real World, Fez Gürsey Institute, Istanbul, 2011

The Mathematical Description of Networks, University of Manchester, 2010