My research focus is the development and application of new geochemical and isotopic tracers in marine geochemistry, paleoceanography and paleoclimate, with particular focus on radiogenic isotope systems (Ar, Sr, Nd, Hf, Pb). Although these tracers have been widely used in solid-earth geochemistry, they represent a relatively new but promising suite of tracers in the low-temperature environment. I utilize them to decipher past changes in ocean circulation patterns, continental weathering, and ice sheet evolution on million-year to millennial time scales. Below some selected projects I am working on.

If you are interested to join the MAGIC isotope geochemistry group at Imperial College London (for research experience as an undergraduate student, a PhD, or a postdoctoral research position), please do not hesitate to get in touch.

1) History of the Antarctic Ice Sheets - Looking Back Into the Future? From the study of marine sediments we know that today's situation on Antarctica with a stable EAIS and a potentially unstable WAIS is just a snapshot in the Cenozoic glacial history, which has been characterized by the transition from a largely ice-free "Greenhouse world" more than 50 million years ago, to the present "Icehouse world" with ice caps on both poles.

I am particularly interested in reconstructing the extent of the Antarctic ice sheet during times of elevated warmth in the past. The most vulnerable parts of the ice sheets today are the low-lying or marine-based areas of the West and East Antarctic ice sheet. Was this also the case in the past? Studying the chemical composition of coarse sand grains and fine clay can help us answer this question and provide valuable clues for the future. The chemical fingerprint of such detritus hosts information on where it was eroded from, in turn revealing the position of the eroding ice margin.

This research has been supported by the Kristian Gerhard Jebsen Foundation, the National Science Foundation, the NERC UK IODP, the European Comission (IRG), the Royal Society, and the Grantham Institute for Climate Change. 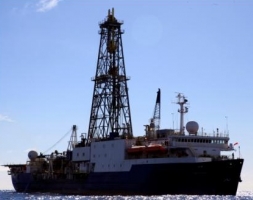 From 4 January to 9 March 2010 I was aboard the drill ship Joides Resolution on IODP expedition 318 to Wilkes Land, Antarctica.

I reported from this expedition in my blog: https://www2.imperial.ac.uk/blog/wilkeslandiodpexpedition/

We also had a professional videographer onboard, who produced weekly video summaries for Ocean Leadership, which can be found on YouTube: http://www.youtube.com/playlist?list=PL8AC7E48053CB639C

Another exciting project was the first deployment of the sea floor drill rig MeBo in the Amundsen Sea in 2017. We recently published our findings on traces of ancient rainforest in Nature. Here is the press release that accompanied the paper.

From January to March 2018 I sailed on IODP Expedition 374 to the Ross Sea to explore the history of the West Antarctic ice sheet and ocean-ice interaction throughout the Neogene.

Check out our recent review paper 'Response of the East Antarctic Ice Sheet to past and future climate change'.

The deep ocean contains a large fraction of the carbon in the coupled ocean-atmosphere system. Therefore small changes in ocean circulation have the potential to profoundly affect the climate system. From the study of marine sediment cores we know that such changes happened in the past – some very rapidly and on short time-scales (decades), and others more gradually and on longer time-scales (millions of years). Deep-sea corals offer two main advantages over sedimentary cores when trying to investigate recent and historical changes in the deep ocean: they can be dated radiometrically, and their skeletons record high–resolution information on past environmental conditions.

I use deep-sea corals to constrain past water mass configurations and ventilation histories by comparing neodymium and lead isotope results with radiocarbon analyses on directly dated scleractinian corals. Despite the unique nature of cold water corals as climate recorders, their potential has not yet been fully realized.

To get some impression on deep-sea coral sampling in the Southern Ocean, check out the following link from a cruise I participated in in 2008 (NBP0805).

For impressions from our 2011 coral sampling expedition in the Southern Ocean check out my blog 'Pretty Corals and Rocky Seas' and 'Drake Passage Corals'.

This research has been supported by the Leverhulme Trust, the National Science Foundation, the Natural Environment Research Council,the European Comission (IRG), and the Grantham Institute for Climate Change.

3) Marine Biogeochemical Cycles of Trace Elements and Their Isotopes

Trace elements play an important role in the ocean as nutrients, as tracers of processes now and in the past, and as contaminants. Their biogeochemical cycling has direct implications for research in such diverse areas as the carbon cycle, climate change, ocean ecosystems and environmental contamination. 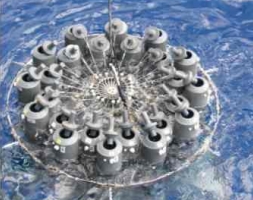 GEOTRACES (www.geotraces.org) is an international study of the global marine biogeochemical cycles of trace elements and their isotopes. Its mission is to identify pro cesses and quantify fluxes that control the distributions of key trace elements and their isotopes in the ocean, and to establish the sensitivity of these distributions to changing environmental conditions.

I co-organised the intercalibration phase of this program for Nd isotopes and rare earth elements (REE). Guidlines for sampling and analytical methods are available on the international GEOTRACES webpage (cookbook) and our two intercalibration papers got published in 2012 in Limnology and Oceanography Methods.

In 2010 the major field program kicked off,  and we had the first UK GEOTRACES cruise (GA10) in the South Atlantic.

This research has been supported by the National Science Foundation and the Natural Environment Research Council.

Check out our publications on Nd isotopes in the North Atlantic along one of the Dutch sections (GA02) and our results on natural and anthropogenic Pb signatures in the Equatorial Atlantic from the second UK cruise (GA06) and a review paper on Nd isotopes comparing east and west Atlantic datasets and their palaeo implications.

Bridgestock,L, Tracing the cycling of Pb and Cd from natural and anthropogenic sources through the troposphere and ocean

Cook,C, Reconstructing the stability of the East Antarctic Ice Sheet - clues from the past for the future?

Griffiths,A, Tracing water masses and anthropogenic inputs in the Southern Ocean: the biogeochemical cycling of Nd and Pb isotopes

Huck,C, From Jungle to Ice: The role of changes in weathering and ocean circulation patterns in the onset of Antarctic Glaciation

Khondoker,R, Sources of aerosols over the South Atlantic Ocean

Lambelet,M, Biogeochemical cycles of neodymium and cadmium in the ocean

Pratt,N, A new collection of deep-sea corals from the southwest Indian Ocean covering the past 25,000 years

Prentice,K, New approaches to coccolith geochemistry and its application to Cenozoic paleoceanography

Xue,Z, Thallium and Cadmium Isotope Variations in the Oceans