I am a member of Experimental Solid State Physics and the London Centre for Nanotechnology. My main research interests are magnetism and transport in nanostructures. In particular I am interested in designing arrays of ferromagnetic bars called "artificial spin ice" because we use the geometry to induce a type of magnetic frustration known as the Ice rules.


A more accessible description of the method can be found here and in the video below.

The Ice rules were initially used to describe the disorder in the hydrogen ion position in water ice, which has finite residual entropy at zero temperature. They also describe the local ordering principle of the spin in spin ice materials such as Ho2Ti2O7 and certain arrays of ferromagnetic nanobars "artificial spin ice." I recently guest edited a Theo Murphy special edition of Philosophical Transactions of the Royal Society A on ''''Emergent Magnetic Monopoles in Frustrated Magnetic Systems''''. 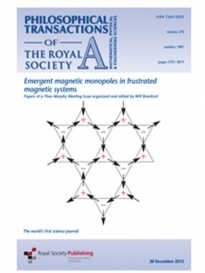 We recently discovered that in artificial spin ices the symmetry of electrical transport measurements changes at low temperature (50K) in a manner indicating collective chiral order. The temparature scale is surprising as the interaction between the nanomagnets is very strong, equivalent to the thermal energy at 1000s of Kelvin so the system is usually considered to be impervious to thermal fluctuations. This work is published in the journal Science, and is available online with open access in full text and as a pdf reprint.


The progress of monopole defects through the artificial spin ice as the precondition field is stepped up, as observed with MFM, is shown in the figure below. The monopole defects appear as spots of very strong contrast in the MFM images. I have a general interest in all aspects of Magnetotransport, but I particularly focus on the roles played by topology and transport spin polarization in the anomalous Hall effect. The anomalous Hall effect is a remarkable area of solid-state physics where even the underlying physical origin has been hotly disputed since the 1950s. Our experimental work builds on the resonant topological anomalous Hall mechanism and the associated power law scaling between anomalous Hall and longitudinal conductivity that was predicted by Onoda et al., [PRL 97, 126602 (2006)], to identify the underlying materials parameter that control the anomalous Hall. This strategy is illustrated in the two case studies below in CrO2[1] and Co2MnSi.[2]

We find that the carriers in films studied here are hole-like, the hole mobility correlating with film thickness and the residual resistivity ratio governed by carrier mobility not carrier density. CrO2 has the band features required for the resonant mechanism and by growing a series of films with systematically increasing structural defect concentration, or dirtiness, at a given temperature, we are able to isolate the universal Hall scaling. CrO2 also exhibits a topological Hall term that is controlled by the concentration of purely magnetic defects, and above 100K we observe coexistence of the universal and topological terms with an apparent deviation from the exponent 1.6. We note that both these terms are intrinsic, and yet one increases and the other is suppressed by the concentration of certain defects, Furthermore both have a quantum topological aspect and we observe coexistence of topological singularities in real and momentum-space in CrO2. An additional observation relates to spin polarisation of the carriers. We have previously reported that the transport spin polarization of these films is not sensitive to the morphological changes in this series of films at 4.2K and that Pt (4.2K) is high and close to 90%. The results presented here support this view, moreover we see no signature to suggest a strong temperature dependence of Pt. This null result is encouraging for spintronic applications suggesting that the spin polarisation is robust in this system up to room temperature. The requirements to engineer this effect in other systems are spin-orbit splitting of magnetic defects, strong coupling of carriers to local magnetic moments and possibly half-metallicity. As these conditions are met in the manganite system it is possible that the manganites would display similar tunability of properties. 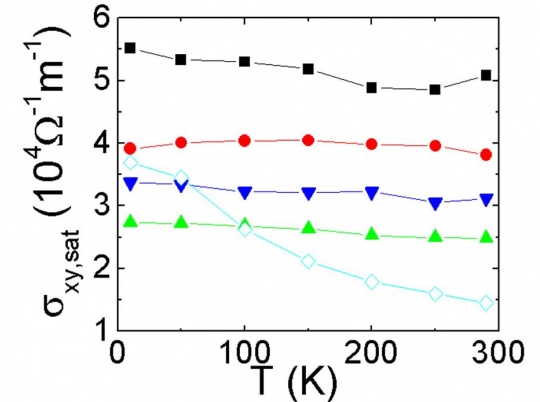 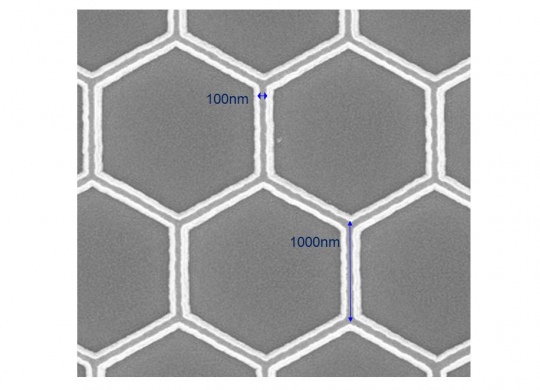 In a complex system made up of many smaller units, each element will interact with all of its neighbours, and the system tries to arrange itself so that the most favourable bond is formed with each neighbour. However, sometimes the neighbours have requirements that are mutually incompatible and a compromise must be found. If this is the case we describe the system as being frustrated. Frustration occurs widely in nature and is thought to be critical to our understanding of such questions as "how do our brains work?" and "how do proteins fold?" The frustrated biological systems described are so complex and so important that the science of frustration has become a major research area and there is great demand for simpler "model systems" where the interaction strength can be tuned, the model system size can be varied, defects can be introduced in a controlled manner and individual elements can be manipulated, removed or their individual state recorded. In such an ideal system one could unite theory and experiment and begin to understand the underlying physics within this complexity.

Magnetic frustration has proved to be the most successful area for finding model systems. Traditionally these were magnetic crystals prepared by solid-state chemistry. How ever it has recently been shown that i t is poss ible to u se nanotechnology to make arrays of ma gne tic b ars s u fficient ly small and sufficie ntly close toge ther that the magne tic interactio ns between them becomes very significant, and that novel geometries can be designed where the magnetic interactions cannot all be satisfied. This development opens up broad new avenues of research in model frustrated systems. In solid-state chemistry one is limited by nature in the geometrical arrangements that are possible, whereas with nanotechnology any pattern that will tessellate can be fabricated into an array, on any length-scale down to the minimum feature size of the lithography.

I am studying such ideal systems that are based on frustrated magnetic nanostructures. Our experience from frustrated magnetic chemical structures tells us that triangles and hexagons are the building blocks that favour magnetic frustration. The initial work was done on arrays of magnetic bars that were isolated from one another, but I focus on electrically continuous lattices, such as the hexagonal honeycomb structure so that electrical curre nt can pass through it. The electrical properties of magnetic materials are sensitive to the magnetic structure and so this gives a direct probe of the frustrated structure and one can study its dynamic response to changes in temperature and magnetic field. Magnetic force microscopy (MFM) is used to image the magnetic structure during these experiments. These in-situ measurements allow the change in electrical response to be correlated directly with the change in magnetic structure, and provide important information of the nature of the coupling between the magnetic and electrical properties of ferromagnetic metals, and the role of topology, which is currently very important for new spin-based electronics or "spintronics" technology.

In addition to improving knowledge of diverse other fields, the magnetic arrays that I will make are exciting in their own right. Their unusual and sensitive response to magnetic fields might be useful in sensors. Furthermore the strong coupling between all the elements, and the fact that the magnetic state of individual elements can be both written (changed by applying a magnetic field) and read, means they could potentially be used for novel types of computation, often described as neural networks because they work more like the brain than like a conventional computer.

MALTS is developed in collaboration with Stephanie Walton and Dr. Solveig Felton. It is a tool to simulate Lorentz Transmission Electron Microscopy from micromagnetic simulations. MALTS works in conjunction with the open access micromagnetic software Object Oriented Micromagnetic Framework or MuMax. Magnetically stable trial magnetisation states of the object of interest are input into MALTS and simulated LTEM images are output. It is described in detail in arXiv:1207.2310v1.

A beta version of MALTS can be downloaded here. The 32-bit and 64-bit programs are ready to use on Windows, Mac or Unix-based machines. Alternatively the source code is available, which requires the MATLAB Compiler to run. It is subject to a GNU general public license.

Fig 4: Comparison of experimental data with LTEM images simulated by MALTS for 20 nm thick Permalloy nanostructures. The micromagnetic states of (a) five bars saturated in the negative x-direction and (b) a cross structure with both single domain and flux closure behaviour, were simulated using OOMMF. (Magnified versions are shown in Supplementary Fig. 3.) The red and blue colours indicate magnetisation in the positive and negative x-directions respectively. (c, d) LTEM simulations using an accelerating voltage of 300 kV, a defocus of 1.5 mm, a Cs of 0 m, and a beam divergence of 0.01 mradians. (e, f) Experimental LTEM images obtained using an accelerating voltage of 300 kV and a defocus of 1.5 mm. Mesh sizes of 5 nm and 10 nm and matrix sizes of 1024 and 2048 were used for the five bars and the cross structure, respectively.